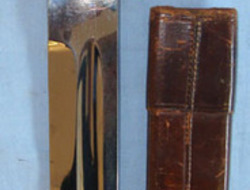 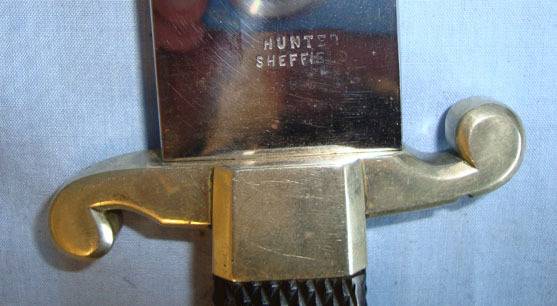 The Sheffield based Hunter family were closely connected to the English Cutlery trade and 3 of it's members became Master Cutlers. Michael Hunter became a Master Cutler in 1852. He and his Son, also named Michael are recorded as having premises at the Talbot works Sheffield in the 1860's. Hunter was one of many cutlers who produced the then popular 'Explorer' Bowie knives which were originally designed by Wilkinson, London (see page 54 of the London Knife Book By Flook). This is an excellent original Victorian Era 'Explorer' large Bowie by Hunter Sheffield. It is in superb near mint condition with a clean 10 1/2" Bowie blade with fuller (16" overall). It has a brass cross guard and pommel nut which is holed for lanyard. It's chequered ebony grip is near mint and undamaged. The ricasso of the blade is clearly marked 'Hunter Sheffield'. The Bowie is complete with original leather sheath which has a single rear belt loop and reinforced throat & chape. All leather and stitching of the sheath are intact with just light scuffing to be expected with age. Price for this impressive Bowie includes UK delivery. Sn 10069