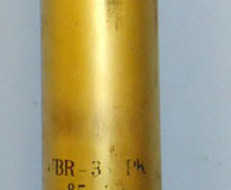 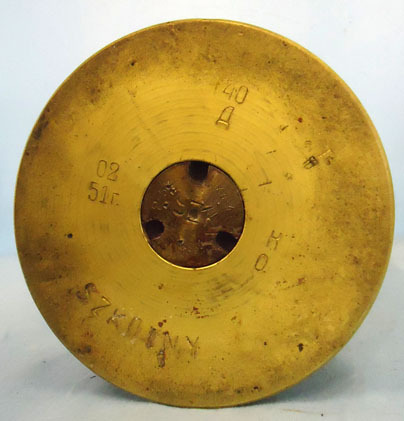 INERT DEACTIVATED. Russian T34/85 Tank WW2 1944 Dated Unfired 85mm Tank Gun (85x629R) APCR/T (Armour Piercing Composite Rigid/Trace) Round. O 1295 INERT DEACTIVATED. This is a Russian T34/85 unfired 85mm Tank Gun (85x629R) APCRT (Armour Piercing Composite Rigid/ Trace) round for the T34/85 tank introduced in 1944. This gun was an improvement over the previous 76.2mm gun original fitted to the T34 tank and this gun was fitted from 1944 onwards. The arrowhead projectile has two copper driving bands and is waisted in its middle. It has inside is a tungsten core for armour piercing. There is an alloy ballistic cap fitted at the top of the projectile. The projectile retains most of its original grey paint with a 10mm white band at the bottom of the ballistic cap. Above the white band is stencilled in black SZKOLNY . The waist of the projectile has various lettering stamped round the circumference under the grey paint. The top copper driving band is stamped SZKOLNY . The brass cartridge case is headstamped SZKOLNY and various other Russian script. The cartridge case is stencilled in back UBR-3??pk 85-?? 85-d-44 58-SUiCZOLG 9/7sw4/74-361 18/1tr/4/74-361 32-74-6 FD . No licence is required to possess this inert round in the UK if retained as part of a collection or display Price includes UK delivery. O 1295