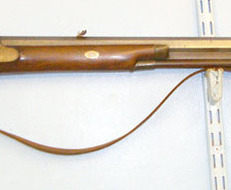 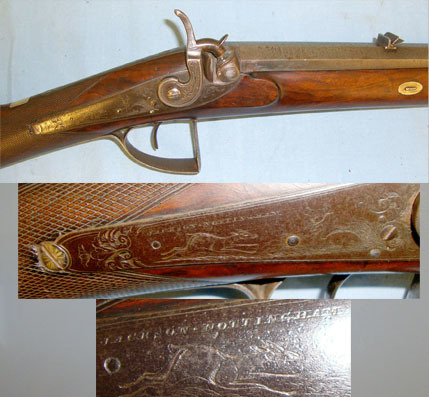 John Jackson was an English, Nottingham based Gunmaker recorded at 7 Church Gate, Low Pavement Nottingham between 1821 & 1866. The Gunmaker Samuel Jackson is recorded at the same premises 1866-1886 then at 7 & 9 Church Gate C1886 – 1912. This is an excellent black powder Deer hunting / sporting rifle by John or Samuel Jackson Nottingham. The rifle has a steel 30” octagonal barrel (46" overall) in 18 bore for lead belted ball. The muzzle has its original removable brass and cork stopper to prevent water from entering the barrel when being carried in the field. The stopper fits the muzzle snugly. The bore has crisp grooved rifling for belted ball. The bore has just staining consistent with age & use. The barrel has a gold band inlaid at the breech end and the action has a silver roundel inlaid. It has all original undamaged Walnut stock with steel butt plate which has an extended tang & foliate engraving. The stock has finely chequered wrist panels and is inlaid with a void German silver escutcheon. The stock has a polished horn fore end block. The large trigger guard for gloved hand has an extended tang and acanthus bud finial. It has a Dolphin hammer and the action plate has a crisp Deer & Stag in the field scene. It is also crisply marked by the manufacturer ‘Jackson Nottingham’. It is fitted with a German silver blade foresight & flip up 3 leaf rear sights. It has sling swivels fitted with an original leather sling & original wood ramrod with brass end caps. Its firing action works as it should. The price includes UK delivery. NB As an antique black powder percussion weapon no licence is required to own this item in the UK if retained as part of a collection or display. Sn 15815

In our community section
More about this: Write for Us!