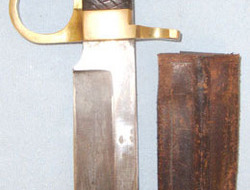 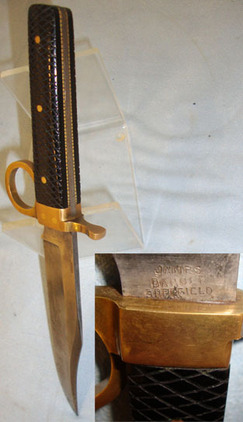 James Barber was a Sheffield based cutler. Page 190 of The Sheffield Knife Book By Tweedale describes how in the late 19th Century the large Sheffield based Company Joseph Elliott & Sons bought out a number of small Sheffield Cutlers including their trademarks and tools. James Barber was one of the small cutlers bought by Elliott & Sons. The company continued to make knives under the trade marks of those Companies. This is an original hand made fighting Bowie made sometime in the Victorian era. The knife has chequered Buffalo horn scales, one inlaid with void German silver plate, brass cross guard with finger ring to improve grip during combat. The grips are secured by a line of brass rivets and the tang has a decorative hand tooled brass frame. The 6” Bowie blade is undamaged with just staining consistent with age. It measures 10 1/2" overall length. The ricasso is crudely stamped "James Barber Sheffield" either by Barber or Elliott & Sons using his trademark. The Bowie is complete with brown leather scabbard. The open top scabbard has a belt loop to the rear. The price for this unusual fighting Bowie includes UK delivery. Sn 13591