Airgun Review: The Artemis P15
Big Trouble From Little China - Artemis P15     My son has been driving me up the wall over the past couple of months as he insists on going vermin hunting with the Bullpup r...
Read more
Home / Shotguns / Single Barrel / United Kingdom / North West 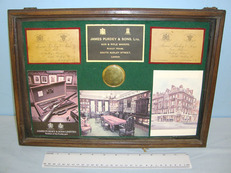 
James Purdey founded James Purdey & Sons Limited in London, England in 1814, locating his business on Princes Street. Prior to starting out on his own, Purdey worked as head stocker for Joseph Manton, the foremost gunmaker of his time. In 1826 the company moved from the Princes Street location to Manton's former premises in Oxford Street. The founder's son, James Purdey the Younger, took over the running of the company from his father in 1858. James the Younger saw rapid change in the development and design of guns and rifles during his lifetime, essentially moving from muzzle loading flintlocks in the 1820s to breech loading hammerless ejectors by the 1880s. James the Younger was always at the forefront of advances in the design and building of his guns and rifles, and took out several patents for technical innovations over the years. Many of James the Younger's patents were adopted by other gunmakers. In 1882 the company moved from Oxford Street to new premises on the corner of South Audley Street and Mount Street, where the company remains to this day. James Purdey & Sons, specialises in high-end bespoke sporting shotguns and rifles. Purdey holds three Royal Warrants of appointment as gun and rifle makers to the British and other European royal families. The open faced, wood framed display board has original Victorian Purdey trade labels & later images of the Company premises. The trade labels and images are clean and intact & are mounted on a green felt background. The centre of the board has a void brass roundel. The frame measures 16 ½”x 11 ½” x 1 ¼”. The rear of the frame is mounted with cord for wall hanging. The price includes UK delivery. Sn 16851
£225.00 ...Read full description
CategoryShotguns
SubcategorySingle Barrel
ConditionUsed
Price£ 225
Sale typeTrade
MakeJames Purdey & Sons London & Later Images Of The company Premises
ModelFramed Display Board With Original Victorian Trade Labels Of The Prestigious Gun
CertificateNo Licence
Your reference16851
Recommended UsageCollection item

In our community section
More about this: Beginners Guide To Shooting -Three steps to hittin...