Airgun Review: The Artemis P15
Big Trouble From Little China - Artemis P15     My son has been driving me up the wall over the past couple of months as he insists on going vermin hunting with the Bullpup r...
Read more
Home / Blades / Knives / North West 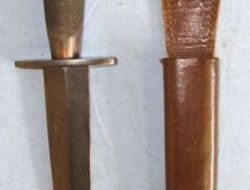 
2nd Pattern Fairbairn Sykes 'FS' Fighting Knives were introduced in 1941. 'Sterile' FS daggers with no markings to identify the Unit or Nationality of the carrier, if captured, were issued to covert operations units of the Special Operations Executive (SOE) and Special Air Service (SAS) operating behind enemy lines. This is an excellent condition WW2 B2 Type, 2nd pattern, FS dagger and scabbard. The dagger is in near mint condition with knurled handle, cross guard, and blade all blackened with no marks of any kind for issue to Covert Ops teams(See page 99 of The Fairbairn Sykes Fighting Knife & Other Commando Knives By Flook). It's original scabbard with blackened brass chape and belt loop has had it's sew on tabs contemporaneously removed. The scabbard has it's original elasticated retaining strap. All stitching and leather are intact. Price for this mint 'sterile' FS dagger as issued to SAS and SOE personnel includes UK delivery. Sn 8865:27
£695
...Read full description
CategoryBlades
SubcategoryKnives
ConditionUsed
Price£ 695
Sale typeTrade
Your reference8865:27
Recommended UsageCollection item