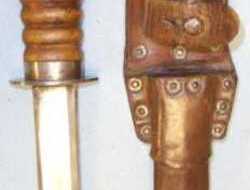 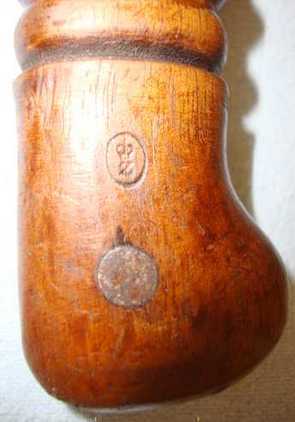 This is a very rare, Original WW2 German Fighting Knife Officially Converted During WW2 From Captured Dutch Weapon & Sheath. The hilts blades & scabbards of these captured knives were altered by the Germans to more closely conform to their Knife Patterns & then reissued to German troops (see page 146 of The Military Knife & Bayonet by Brett). The knife is 11" overall with a 5 3/4" clean single edged blade. It has a short oval crossguard stamped '46'. it's ferrule is stamped with a small 'Crown above Z' mark. It's handle is contoured and grooved for grip. The handle also has a small 'Crown above Z' mark. The knife is complete with it's original leather scabbard with riveted frog & belt loop with single retaining strap with stud fastener. Price for this rare captured & converted WW2 fighting knife includes UK delivery. ED 2202