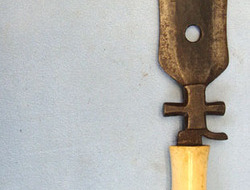 
A 19th Century authentic ceremonial knife / axe of the Mangbetu people residing in Central Africa. The Mangbetu stood out to European explorers because of their elongated heads. Traditionally, babies' heads were wrapped tightly with cloth in order to give them this distinctive appearance. The practice, called Lipombo, began dying out in the 1950s with the arrival of more Europeans and westernisation. The Mangbetu are known for their highly developed art and music. One instrument associated with and named after them is the Mangbetu harp or guitar. Many recent studies feature the Mangbetu as a historically cannibalistic people. According to Mangbetu men interviewed in the documentary Spirits of Defiance: The Mangbetu People of Zaire it appears that many Mangbetu currently believe their ancestors to have practiced cannibalism. The knife was originally used as a weapon of war and also as an agricultural implement, but later on developed into a luxury item and a symbol of status and authority. This one is a 19th century one with a large sickle shaped blade. It measures 10 1/2" (point to point diagonally) and 15 1/4" overall from top to bottom. It is very nicely forged. The original blackening of the steel with the polished edges is maintained. There are three holes in the blade. It has a one piece ivory grip with very good yellowish age patina. The grip is secure. Sn 14318
£475.00 ...Read full description
CategoryBlades
SubcategoryOther Blades
ConditionUsed
Price£ 475
Sale typeTrade
MakeLarge Ceremonial Knife / Axe of the Mangbetu Tribe of Central Africa with Ivory
Manufactured Year19th Century
Your reference14318
Recommended UsageCollection item