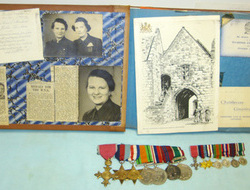 
A very complete Member of the British Empire breast Order, long service group of 7 medals to Mrs. Edith Alice CHRISTIAN-FLETCHER M.B.E. from Stockport a long serving member of the Womens Voluntary Service. The medals are the Civilian MBE in a gilt finish, 1939/45 Star, France & Germany Star, Defence Medal, War Medal, Queen Elizabeth Coronation Medal and a Womens Voluntary Service Medal. All unnamed as issued with original ribbons and fitted on a pin bar. A corresponding, contemporary set of miniatures is included as is the WVSM box. With the medals is a scrap album containing dozens of press cuttings about her, Photographs, Invitations and other personal items. She was born in Liverpool in 1895, married in 1919 & moved to Cheshire. She joined the WVS in 1938 & aided in billeting refugee children & making camouflage netting. During the Blitz she became a Queen's Messenger & travelled with them to help in London during the V1 bombings. At the end of 1944 she travelled with the WVS throughout Europe particularly in Holland and Germany. In 1960 she received the MBE for her work in the community and in 1961 the WVSM when it was first instituted. She received an additional Long Service clasp in 1968 for 30 years service. She was involved in a multitude of organisations all listed in papers in the album. She died in 1970. Price includes UK delivery. M 147
£350.00 ...Read full description
CategoryAccessories
SubcategoryOther Accessories
ConditionUsed
Price£ 350
Sale typeTrade
Manufactured YearWW 2
Your referenceM 147
Recommended UsageCollection item

In our community section
More about this: The lack of Grouse shoots this year costs some are...