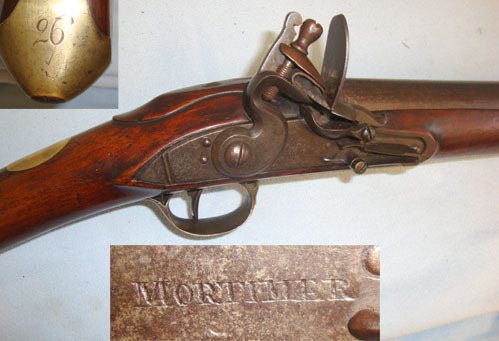 This is an excellent example of an unusual variant Officer’s private purchase Cavalry carbine. It has nice patina to the metal work throughout. It has a heavy military hammer fitted with flint. The lock plate is crisply stamped by the manufacturer ‘Mortimer’ (many Gunsmiths named Mortimer are recorded as working in London during the 1700’s & 1800’s). It has a 19” barrel (34 ½” overall) and is .750 musket calibre. The smooth bore has light staining consistent with age. The top of the barrel is stamped with black powder proofs & ‘London’. It has its original steel ram rod, grooved breech rear sight and block fore sight. The carbine also has brass fore end block, ram rod mounts, void inlaid brass escutcheon, trigger guard with extended tang & butt plate which is engraved with Regiment mark ‘26’ (most likely to The 26th Light Dragoons. The Regiment was raised 25th March 1795, renumbered in 1803 as the 23rd Light Dragoons. The Regiment was disbanded after the Napoleonic wars in 1819). It is complete all original, undamaged Walnut furniture in Brown Bess form of the era. It’s cocking and firing actions work perfectly. The price includes UK delivery. NB As an antique flintlock Carbine no licence is required to own this item in the UK if retained as part of a collection or display. Sn 14750

In our community section
More about this: The Best Shooting Grounds in London 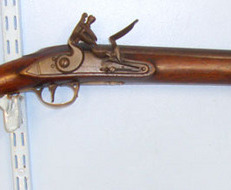