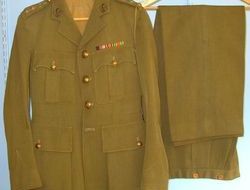 
After distinguished service in both World War I and World War II, the Manchester Regiment was amalgamated with the King's Regiment (Liverpool) in 1958, to form the King's Regiment (Manchester and Liverpool) which was, in 2006, amalgamated with the King's Own Royal Border Regiment and the Queen's Lancashire Regiment to form the present Duke of Lancaster's Regiment (King's, Lancashire and Border). During WW2 the Manchester Regiment served in Italy, North West Europe and the Far East. This is an original WW2 Manchester Regiment Officer's Uniform. The Tunic is clean & has just the service wear to be expected. It is single breasted with open collar, pleated chest pockets and plain lower pockets with flaps. The epaulettes bear enamel and gilt rank insignia stars of Lieutenant. The lapels have metal Regiment Insignia. The tunic is mounted with WW2 campaign ribbons. The Tunic has all but one of its original brass King's Crown Regimental buttons. The left shoulder of the Tunic is fitted with an original green cord lanyard. The Tunic is approx UK size 38" Chest. The matching trousers have side slash pockets and buttoned fly. They are approx 30-32" Waist, 33" Leg. The trousers have no damage but do have light service wear. The lining of the trousers’ have a clean manufacturer label ‘Moss Bros Covent Garden London’ (illustrated inset in image 2). Price includes UK delivery. Sn 11531
£245.00 ...Read full description
CategoryAccessories
SubcategoryClothing
ConditionUsed
Price£ 245
Sale typeTrade
Manufactured YearWW 2 era
Your reference11531
Recommended UsageCollection item