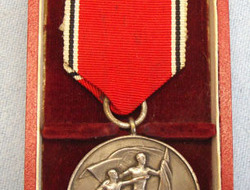 
An original boxed Austrian Anschus medal and ribbon. The Anschluss Commemorative Medal was a decoration of Nazi Germany awarded in the interwar period. Instituted on May 1, 1938, the medal commemorated the annexation of Austria to the German Reich, the so-called Anschluss. The move was the first in Hitler's quest for Lebensraum, and it strengthened German flanks while weakening those of Czechoslovakia. The medal is in very good condition, it has the original ribbon and comes in the original issue red box which is silk and velvet lined. It has a snap shut lid which operates as it should and the Nazi stamp in gold on the top. On the obverse of the medal, symbolic of Austrian adhesion to the German realm, a man holding the Nazi flag stands on a dais bearing the emblem of the “Third Reich”. He assists onto the dais a second man, on whose right hand a broken shackle still may be seen. On the reverse is the inscription "13. März 1938" (March 13, 1938), the date of the Anschluss, the date is surrounded by the words, "Ein Volk, Ein Reich, Ein Führer" ("One People, One Empire, One Leader"). The edges of the medal are smooth. It is suspended from a red ribbon with white-black-white stripes at the edges of the ribbon. It has a silvered matte finish. The price includes UK delivery. Sn 12974:15
£175.00 ...Read full description
CategoryAccessories
SubcategoryOther Accessories
ConditionUsed
Price£ 175
Sale typeTrade
Manufactured YearNazi era
Your reference12974:15
Recommended UsageCollection item