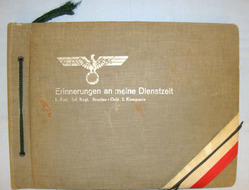 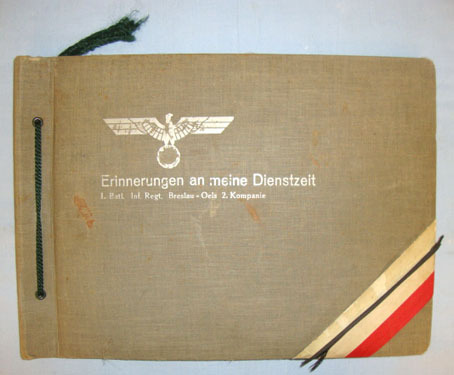 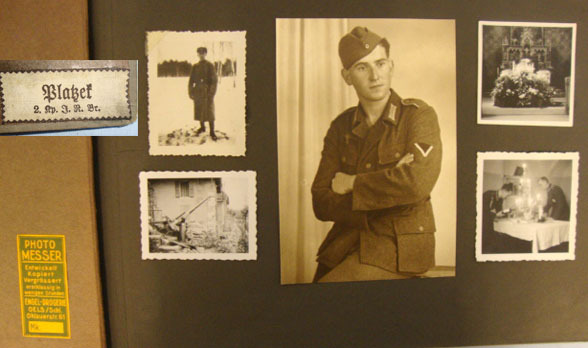 This is an original WW2 bound Nazi German Photograph Album to a soldier of the 1.Batl. Infantry Regiment Breslau- Oels 2. Kompanie. The Album measures 12 ½” x 9 ¼” x ¼” when closed. It has a green linen cover and retains its original black white and red tape decoration. The cover of the album has an impressive stamped Nazi German ‘Eagle With Swastika’ National Emblem together with ‘Erinnerungen An Meine Dienstzett’ (My Memories Of War) and ‘1.Batl. Infantry Regiment Breslau- Oels 2. Kompanie’ all printed in silver. The album contains 9 double sided Pages of cardboard pages separated by individual bound pieces of tissue paper. The tissue pages serve to protect the images on the cardboard pages. The pages are individually mounted with contemporary original photographs of Officers & Other Ranks both in training and in the field including drill, weapons and equipment training. There are also individual and group portraits of individual Officers and Other Ranks no doubt including the owner of this album. Some of the photographs depict Soldiers in the field in Russian Eastern Front arctic/ snow conditions. There is also an image of what appears to be a Russian building with onion dome towers (these types of tower are also found in parts of Eastern Germany but in context of the other pictures could be Russian). There are also photographs of battle damaged buildings, a gun emplacement, An artillery piece being transported, Soldiers visiting a bed ridden comrade in hospital and German soldiers in their barracks, posing with their rifles and wearing what appears to be white Russian blouson shirts. The inside of the front cover has a nice bright yellow and green period label and the inside of the rear cover has a piece of cloth tape adhered (illustrated inset in image 2). Both have printed German script. The album and photographs are clean. Price includes UK delivery. Sn 12285