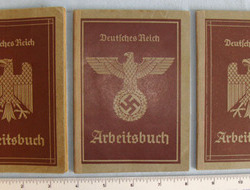 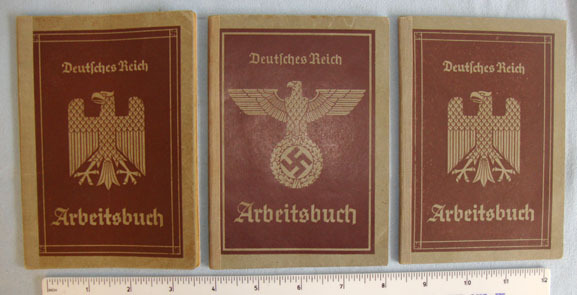 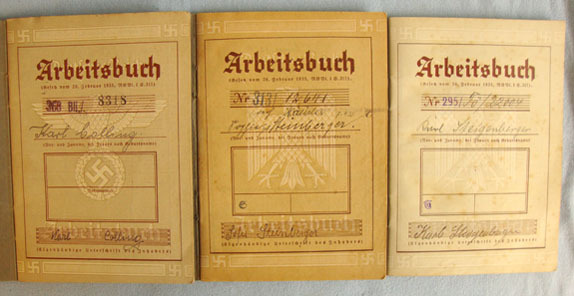 The Arbeitsbuch was a result of the Laboor Law of February 1935 that required labour registration and the use of the appropriate document. The purpose of the Arbeitsbuch was to document the work history of each German citizen. During the twelve years of the Third Reich the Arbeitsbuch came in three editions. The main difference were the variations of the cover. The first style (far left and far right in image 1) came with a Weimar eagle, small swastikas on all four corners and the words Deutsches Reich and Arbeitsbuch in the old German Fraktur lettering. On the cover of the second style (centre in image 1)the Nazi eagle replaced the Weimar eagle and the swastikas in the corners were discontinued. The third style not included in this collection had a slightly changed Nazi eagle but the Fraktur lettering was replaced by the simpler Altschrift. The Arbeitsbuch had, depending on which edition, between 32 and 38 pages. These documents were for German citizens only, foreigners who worked in the Reich had to carry a similar book which was printed on a different colour paper and which contained a photo of the owner while no photo was required in the domestic document. This was the "Arbeits-buch für Ausländer". This is a collection of 3 3 Nazi German Civilian Deutsches Reich Arbeitsbuch. The collection consists of 2 of the 1st type and 1 of the 2nd type. All are clean with undamaged pages and hand written and ink stamped entries including WW2 dates detailing the employment history of the named citizens to whom the documents belonged. The 1st type documents have 32 pages, the 2nd type 38 pages. Price for this collection of original Nazi documents includes UK delivery. Sn 12974:9