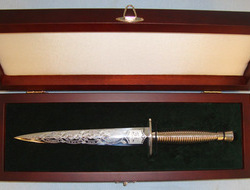 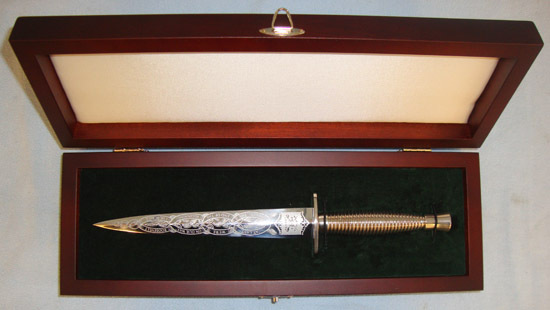 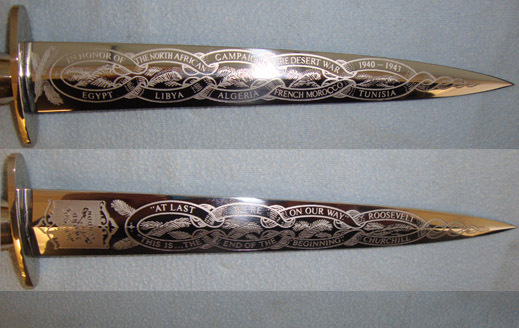 The Pesh-Kabz or Choora is a type of Perso-Afghan knife designed to penetrate chain mail armour (see page 494 of Stone's book 'A Glossary Of Arms & Armour'). The knives were typically used as a thrusting weapon, however, the wide ‘T’ section blade also possesses considerable slicing performance, and as such may also be used effectively with slashing or cutting strokes. During the British Colonial rule in India, the British frequently referred to all Afghan blades of this pattern collectively as "Afghan knives" or "Khyber knives", after the Khyber Pass that marked the transition from British India to the nation of Afghanistan. In India, manufacture of the pesh-kabz was centered in the northern city of Bhera, now part of Pakistan. During the First and Second Anglo-Afghan wars, the pesh-kabz was frequently the weapon of choice for finishing off wounded British and colonial troops, as the Afghan tribesmen did not take prisoners except for use as hostages. This is a very good original example of the pesh-kabz / choora made in the Victorian era. It has a heavy 9" single edged T section blade (13 ¼” overall). The 1 ½” wide blade with single edge narrows to a pin sharp point. The blade has staining consistent with age but no rust and is etched on both sides with foliate designs. It has the correct curved pronged pommel and finger guard. The pommel has a small fixed lanyard ring. The grip frame is decorated with hand tooled geometric designs. The scales are formed from sections of wood and pieces of riveted polished bone or antique ivory. The pommel sections have pierced foliate decoration. The scales have a few minor, stable chips consistent with age and use. The knife is complete with its original wood lined, leather hide covered scabbard. The leather is pierced near to the throat to reveal a naïve green and red enamel effect decoration. The leather of the scabbard has some areas of surface wear. The scabbard has a small external metal chape. Price for this great historic piece includes UK delivery. Sn 12500:1