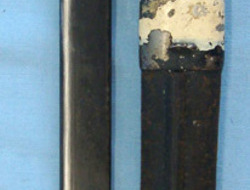 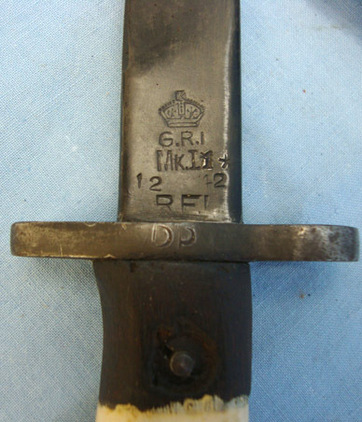 An Indian Pattern No 1 MK II* bayonet with unfullered blade and complete with the original No1 shortened scabbard. This is a newly made bayonet by R.F.I. (Rifle Factory in Ishapore) in December 1942 which has a shorter unfullered blade and is not a conversion. (see page 349 item 154 in Skennerton's 'British & Commonwealth Bayonets' book). The bayonet has an unfullered 12" long blade which is blackened. It has slab grips secured by two screw bolts which have a white painted band around them. The pommel has a push button release and clearance hole, it has "68" stamped into it on one side. The crossguard is straight. The ricasso is stamped on one side with inspection marks on one side and with the Crown above "G.R.I. MK I* 12 42 R.F.I.". The No 1 scabbard is leather with metal chape and locket, it has two white paint bands around it. The scabbard has a large round frog button and three rivets above. The price includes UK delivery. 10880:35