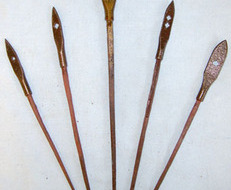 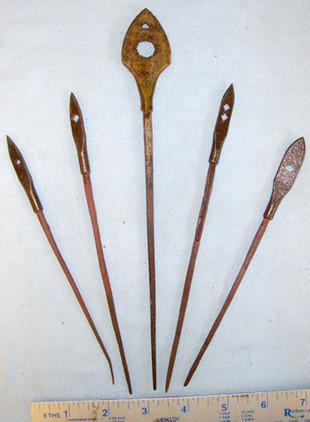 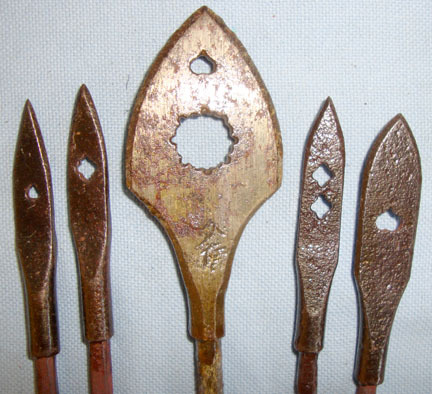 The Japanese arrowhead called Yajiri or Yanone have many uses and shapes. There are many variations of each style. These arrowheads are made with the same quality and attention to detail the same as their swords and other edged weapons as they are folded steel and most are tempered. Yanone were used for battle, hunting, gifts or rewards and for presentations. In general the standard point style looking like a small Yari (spear) were used for war and armour piercing. It is said that a samurai might have a quiver of 26 Arrows (Ya) and one of them, called the Kabura-Ya or Chief arrow, and was only used if the battle was lost. These yanone have extensive detail in the saw-cut or carved patterns. Most yanone have names related to their shapes. These include; bamboo leaf, camellia leaf, willow leaf, tree leaf, aoi leaf, water plantation, fish head, crabs claw, dragon's tongue and wild goose beak to name a few. These arrowheads are usually signed on the blade below the piercing and above the shoulder. Normally there are characters on both sides of the blade but in many cases the signature (mei) has been almost polished away. This style of arrowhead appeared during the Momoyama period (1573-1615) and continued through the Edo Period to 1868. Our collection comprises of 4 pointed armour piercing yari spear heads. 2 with heart shaped piercings (each 7” overall length including steel shafts) and 2 with geometric piercings (each 8” overall length including steel shafts) & 1 large Kabura-Ya (Samurai Chief Arrow) This arrow head is longer measuring 9 ½” overall length including steel shaft. The willow leaf head has a gilt finish, 1 ¼” at its widest & 2 ½” from tip to shoulder . The head has a central saw cut geometric piercing and a small heart piercing near to the tip. On one side of the head is a crisp Japanese script Mei signature worthy of further research (illustrated in image 2). All of the arrow heads have the form and patina of hand forged ancient arrow heads from the late Momoyama / Early Edo Period . The price includes UK delivery. ED 2218