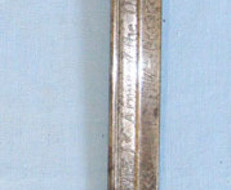 
The 69th Infantry Regiment is a Regiment of the United States Army. It is from New York City and known as the "Fighting Sixty-Ninth" a name said to have been given by Robert E. Lee during the Civil War. An Irish heritage unit, it is also nicknamed the "Fighting Irish". The Regiment’s history dates back to 1849, when it was created as the 9th Regiment New York State Militia, and A Company, 1/69 can trace roots back to the American Revolution. The Regiment has seen combat in five wars: the American Civil War, World War I, World War II, the Iraq War and the Afghanistan War. It has also participated in 23 campaigns, so many that the staffs of its Regimental colors are authorised to be one foot longer than normal to accommodate them all. This very rare piece is an original WW1 1917 dated Pattern 1913 Remington bayonet for Pattern 1914 (P14) rifles which has been etched to the ‘Fighting 69th’ for presentation. The bayonet grips have two vertical grooves which distinguishes it from Pattern 1907 bayonets and are secured with two screw bolts. The pommel has a push release button which works as it should. The cross guard is waisted and has a muzzle ring. The 16 ¾” single edged blade is fullered. The ricasso has inspection marks on one side (including struck out British WD arrow) together with U.S. (Army Mark). The reverse has 1913 (pattern) above ‘5 17’ (May 1917 date) and Remington roundel. One side of the blade is etched ‘69th Infantry Div (The Fighting 69th) Army Of The United States Of America U.S. Army E Pluribus Unum (translation -out of many, one) 1917 France 1918 (The Great War)’. The blade has staining consistent with age but no damage or rust. The bayonet is without scabbard. The price for this very rare WW1 presentation bayonet to the ‘Fighting Irish’ includes UK delivery. Sn 15156
£975.00 ...Read full description
CategoryBlades
SubcategoryBayonets
ConditionUsed
Price£ 975
Sale typeTrade
MakeRemington
Manufactured Year1917
Your reference15156
Recommended UsageCollection item