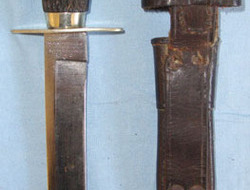 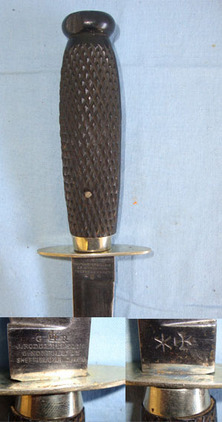 Joseph Rodgers is perhaps rivalled only by George Wostenholm in terms of its importance to Sheffield cutlery and its fame around the world. The mark of The Star and Maltese Cross was registered by the Rodgers Company in 1764. With increasing business in what is thought to have been exclusively Pocket Knives, in around 1780, the firm moved to larger premises at No. 6 Norfolk Street. Eventually, as Rodgers expanded, it would acquire surrounding property until the famous Norfolk Street Works occupied the entire plot. Joseph Rodgers’ success is evident in the firm’s appointment to five successive sovereigns - George IV, William IV, Queen Victoria, Edward II and George V. Rodgers & Sons made popular private purchase weapons during WW1 including trench daggers. This a is an original WW1 era British Officer’s private purchase trench fighting knife by Joseph Rodgers & Sons with its original leather scabbard. It has an ebony handle which has a deep chequered design. The pommel has a small, old, stable chip. It has a German Silver ferrule and finger guard. It’s slim, clean, 6 ¾” single edged, Bowie shaped steel blade is marked ‘J. Rodgers & Sons 6 Norfolk St, Sheffield, England’ together with Kings Crown and ‘GR’ (George Rex) and the reverse with Star and Maltese Cross trademark. The knife measures 11” overall length. Its original brown leather scabbard has a riveted integral belt loop and retaining strap with small buckle. The top 2 rivets on the rear of the scabbard which form the belt loop are absent but an old contemporary repair secures the top of the belt loop to the scabbard body. The rivets could easily be replaced. All leather and stitching of the scabbard are intact. Price includes UK delivery. Sn 12569