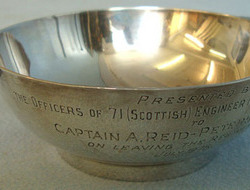 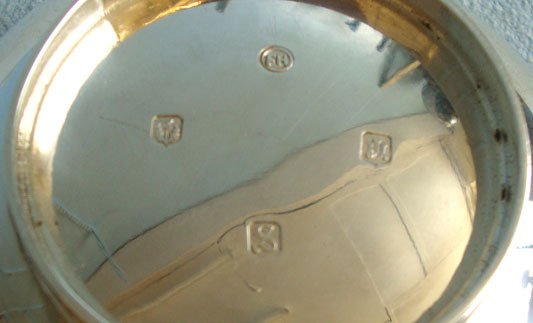 A 1975 Silver Regimental Scottish Drinking Cup to the Scottish Volunteer Engineer Regiment and specifically to Captain A. Reid-Peters RE. The drinking cup is in excellent condition, free of dents or damage. It is hallmarked silver, the hallmark is to Edinburgh 1973-74 and it weighs 150grams. The Royal Engineer’s Army Reserve Regiment is based across Scotland and Northern Ireland. The Regimental Headquarters (RHQ) is based in Leuchars, Fife, with our 3 Squadrons based in Bangor, Paisley and Cumbernauld. The cup is engraved on one side with "Presented By The Officers of 71 (Scottish) Engineer Regiment (Volunteers) Captain A. Reid-Peters RE (V)On Leaving The Regiment July 1975" and on the other with the Regimental Crest. On the base it has the hallmarks. The cup measures 4" across and stands 1 1/2" high. It has two drinking handles. The price includes Uk delivery. Sn 11355