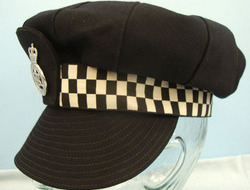 
This is a scarce 1967 era Metropolitan Police Women's designer uniform hat by Royal Designer Simone Mirman, Complete with Metropolitan Hat Badge. Simone Mirman, died on 1st August aged 96, she was one of Britain's best-known milliners, designing hats for members of the royal family, show business personalities and aristocrats during a career that spanned half a century. She had her own showroom and a workroom in which half a dozen women would make up her designs. In 1952 she had been visited by a lady-in-waiting to Queen Elizabeth the Queen Mother, who invited her to show a collection of her hats to Princess Margaret at Buckingham Palace. Princess Margaret became one of her most loyal clients, and Simone Mirman was granted Royal Warrants by both the Queen (Simone Mirman created the hat worn by the Queen at the Investiture of the Prince of Wales in 1969) and Queen Elizabeth the Queen Mother. Her clientele extended far beyond royalty, also including actresses such as Vivien Leigh and Valerie Hobson, and the cream of English society. In 1967 Simone Mirman designed the caps which accompanied Norman Hartnell's new uniforms for women of the Metropolitan Police. This is one of those caps, as a trial hat for Police women of the era in the Metropolitan Police. 1n the 1960-1970's London was the centre for fashion and design and as such the uniform was being re designed by Norman Hartwell. The hat is in perfect undamaged condition. It has a large visor peak which is lined on the under side in white. The top is made up of 12 sewn segments with a button in the centre, all made in dark blue cloth. The hat has a black and white chequered band with Metropolitan cap badge. On the inside it is lined with purple silk and has a 'Simone Mirman' white label which says "Designed by Simone Mirman Paris London Roma". There is no size in the hat. This scarce hat will add to any collection of police memorabilia. The price includes UK delivery. Sn 13907:34
£275.00 ...Read full description
CategoryAccessories
SubcategoryClothing
ConditionUsed
Price£ 275
Sale typeTrade
Manufactured Year1967 era
Your reference13907:34
Recommended UsageCollection item