This is an original, rare, C1890 Native Polynesian Pole arm / Spear. These weapons often came into the hands of Pirates and used in the South China Sea, Shanghai, Java & Sumatra regions to attack Merchant Ships. This original Native Polynesian Pole Arm Spear was recovered by British Master Mariner G.U. Richard after a Pirate raid on his Tramp Steamer in the South China Sea. A Great Nephew of Richard has provided a note containing detail regarding the circumstances of the weapon’s capture and his Great Uncle’s career. He describes his Great Uncle as a Master Mariner who owned and skippered his own Tramp Steamer in the 1890’s operating between Liverpool and Shanghai. It was during this time that Richard’s Ship came under Pirate attack in the South China Sea. The attack was repelled by the crew and the Pirate’s weapons including this Polynesian Pole Arm Spear were recovered, either from captured Pirates or from the deck of the ship where abandoned by the attackers. Richard later took up the role of Harbour Master at Kowloon before retiring to Tideswell in Derbyshire England. Richard is described as ‘A bit of a card’ and as having ‘lost a fortune on slow horses and fast Women’. Richard appears to have been fortunate to have lived through his sailing days as he was apprentice at the helm during the ‘Wreck Of Barque Ann Gambles’ off New Zealand (Information available on the internet). This weapon along with others came into the possession of the family when at the turn of the Century Richard visited his kin in Pendleton, Salford, England. The weapon subsequently came into the possession of the Nephew in 1957 and remained with him until acquired by us. The spear typical of the Native Polynesian Spear form measures 87" overall. The Spear's 10 3/4 " long elegant leaf shaped steel blade has a full length medial ridge and is undamaged with nice patina throughout. It has a 7” ornately hand beaten decorated brass ferrule and is securely attached to a hand crafted dark wood shaft. The lower section of the shaft has hand tooled decoration. The shaft and blade are straight (the full length image illustrated appears slightly warped however this is due to image sizing not the shape of the weapon). A copy of the note from the family accompanies the weapon. Price for this weapon which is a great conversation piece & would make an excellent addition to any Ethnic collection or display includes UK delivery. Sn 11077 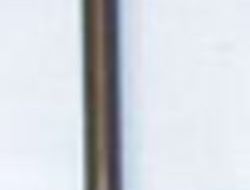