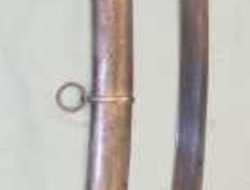 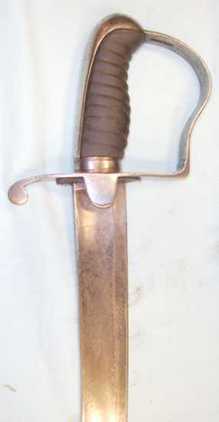 The Pattern 1796 Light Cavalry Sabre was used primarily by British Light Dragoons and Hussars during the Napoleonic Wars. The blade is remembered today as one of the best of its time and has been described as the finest cutting sword ever manufactured in quantity. Officers of the famous 95th Rifles, Light Infantry Regiments and the "flank" Companies of Line Regiments adopted these Swords (The Hit Napoleonic War, Book & TV series Sharpe's Rifles featured this pattern of Sword). The Royal Horse Artillery were issued with Saw Bladed versions of the 1796 sabre. These swords were used both as a weapon and for foraging in the field and cutting wood to make shelters & artillery emplacements etc. This is only the second 1796 Pattern Artillery Sabre we have seen in the last 30 yrs. After Artillery use many of these sabres had their saw teeth officially removed for re-issue to Infantry Troops. This original 1796 Royal Horse Artillery sabre is in excellent condition. It has a clean single edged, fullered 31 3/4 inch Sabre blade (36 1/2" overall). The saw teeth of the blade have been officially removed in the period and the remains of the teeth can still be seen on the edge of the blade (illustrated). It's cross guard, knuckle guard, pommel and leather covered wood ribbed grip are original & correct for the Royal Horse Artillery Sword Pattern. The sword's hilt is fitted with original leather washer. The Sabre is complete with it's original steel scabbard with 2 hanging rings. The scabbard has no dents. Price for this very rare Sword and Scabbard includes UK delivery. Sn 8969