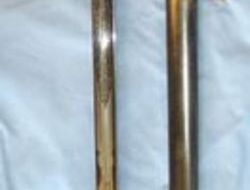 The Royal Horse Guards (RHG) was a Cavalry Regiment of the British Army, part of the Household Cavalry. The RHG was founded in 1650. The Regiment fought, with distinction at the Battle of Waterloo and during WW1. In 1918, the Regiment served as the 3rd Battalion, Guards Machine Gun Regiment. During the Second World War the Regiment was part of the Household Cavalry Composite Regiment. The RHG was amalgamated with the Royal Dragoons (1st Dragoons) to form the Blues and Royals (Royal Horse Guards and 1st Dragoons) in 1969. In the 1860's all 3 of the British Household Cavalry Regiments adopted one general pattern sword for all occasions except active service. This sword became known as the 'State Sword' (See pages 137-139 of Robson's book Swords Of The British Army). This is an original WW1 Era British 1874 Pattern Royal Horse Guard's Officer's State Sword & Scabbard. The sword measures 44 1/2" overall with a 38" single edged fullered blade which has beautifully etched panels on both sides. One side is etched with initials 'J.D.S.' and 'Crown GR' (George Rex), the reverse with Horse Guards Regimental badge with Latin motto, King's Crown and entwined banners with Battle Honours. The ricasso has the ordnance acceptance star and inlaid roundel. The back of the blade is numbered '17115'. It has a voided knuckle bow with decorative brass fittings with Kings Crown & Stylised Royal Cypher (an example of this sword hilt is illustrated on page 138 plate 125 of Robson's book). It's Fish Skin handle is undamaged and it has it's original wire binding which is tight. It has a knurled pommel cap with ball top. The sword is complete with original steel scabbard with brass fittings and 2 brass hanging rings. The scabbard is undamaged and has just 1 small dent to the body between the hanging ring fittings consistent with service wear. Price for this excellent sword and scabbard includes UK delivery. Sn 10125