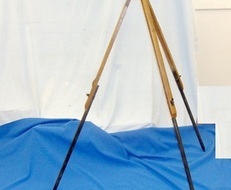 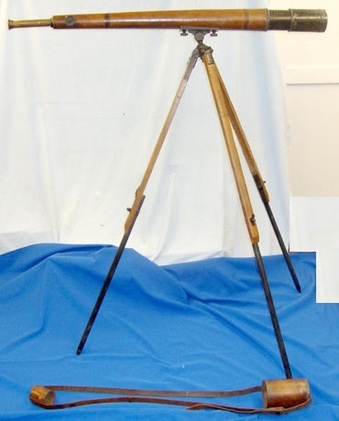 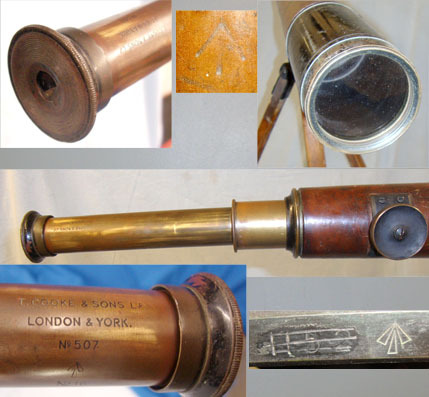 T. Cooke & Sons was an English instrument-making firm, headquartered in York. It was founded by Thomas Cooke by 1837. By 1855 Thomas Cooke had built a factory at Bishophill in York. The firm built the clock face on the Darlington clock tower. Following the death of Cooke in 1868, the business was continued by his sons. In 1914, a new factory was built in Bishophill. In 1915 Vickers acquired a controlling stake in the company.In 1922 Vickers merged it with Troughton & Simms to form Cooke, Troughton & Simms. In 1924 the company became a wholly owned subsidiary of Vickers. This is a large original Boer War & WW1 era British War Department Telescope by T. Cooke & Sons. The heavy brass instrument is undamaged and retains its original leather covering which is stamped with WD arrow. It also has removable leather lens cover caps joined by leather straps with buckles and leather shoulder strap. One side of the telescope has a brass adjustment dial. All optics are fully functional and have recently been serviced and cleaned. The underside of the instrument has 2 screw thread bolts with screw caps for mounting to its tripod. Near to the eyepiece, the draw of the telescope is stamped with crisp manufacturer detail and WD arrow (illustrated in image 2). Fully extended the telescope measures 49 ½” length. The instrument comes with its original brass and Oak tripod which has adjustable legs. The brass legs have spiked ends and have original green paint. The top of the tripod has the correct blackened brass mounting bracket with correct screw holes for the instrument’s screw bolts which fit perfectly. The mounting bracket is stamped with WD arrow and struck out number (illustrated in image 2). The tripod stands 53 ½” tall when fully extended. The price includes UK delivery. Sn 14431