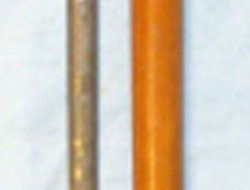 
The 42nd (Royal Highland) Regiment of Foot was a Scottish Infantry Regiment in the British Army also known as the Black Watch. The Regiment was numbered 42nd in the line in 1751 and formally titled the 42nd (Highland) Regiment of Foot. In 1881 the Regiment was named The Royal Highland Regiment (The Black Watch), being officially redesignated The Black Watch (Royal Highland Regiment) in 1931. In 2006 the Black Watch became part of the Royal Regiment of Scotland. Throughout its history the Black Watch have fought with distinction in all Major conflicts involving Britain. Toye, Kenning & Spencer plc is a prestigious British jewellery and clothing manufacturer based in the Jewellery Quarter, Birmingham; Covent Garden, London and Bedworth, Warwickshire, England. Founded in 1685, the company remains family-run by members of the Toye family. This is an excellent original lacquered Maple sword stick made by Toye Kenning & Spencer in the form popular in the Edwardian era. The sword has a 27 ¾” blade which is beautifully blued & etched with panels on both sides containing Masonic Devices & Religious imagery. On one side the blade is marked by the manufacturer ‘Toye Kenning & Spencer ‘ & 'Made In England'. The sword measures 34” overall in its scabbard. The handle has a bulbous silver round top handle with embossed King’s Crown Black Watch Regiment Badge bearing the Regiments line number ‘42’ and banner ‘Royal Highlanders’ (there are no hallmarks on the handle). The scabbard is undamaged & has a brass roundel throat mount and conical brass end cap. Price for this attractive Edwardian Masonic sword stick no doubt commissioned by a Scottish Officer of the famous Black Watch Regiment & manufactured by a distinguished English Jeweller includes UK delivery. Sn 12082
£575.00 ...Read full description
CategoryBlades
SubcategoryOther Blades
ConditionUsed
Price£ 575
Sale typeTrade
MakeToye Kenning & Spencer Quality, Edwardian Scottish 42nd Royal Highland Regiment
Manufactured YearEdwardian
Your reference12082
Recommended UsageCollection item