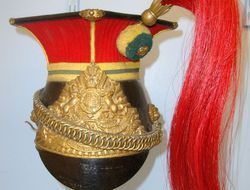 
This is a scarce, original, Cavalry Trooper's Lance Cap of the 12th (Prince Of Wales) Lancer's. The Lance Cap has a skull and peak of black patent leather with yellow & green cloth band. It has a mortar board top with red cloth ridged sides and yellow cord descending the angled corners. It has a brass plume boss with Red horse hair plume. The boss is fitted with a yellow & green material ball mount bearing the embossed 'Queen's Crown with Crossed Lances and 12' of the 12th lancers. The Cap plate has a Victorian Crown at the top over the Royal Arms of Great Britain with 5 Battle Honours including the Crimean War. The leather backed brass chin chain is suspended from two Lion's head ear bosses. The Lance Cap is complete with sweat band and liner. The Crown has ink stamps ‘WD with Arrow’ & ‘9 (September) 1902’ (Queen Victoria died on 22nd January 1901 and was succeeded by King Edward VII, Uniform including Helmets & Lance Caps made during the reign of Queen Victoria continued to be issued with Queen’s crown plates in the early years of King Edward’s Reign). Material on the inside of the helmet has remnants of a size and manufacturer label which is unreadable. It is approx UK size 6. Price includes UK delivery. Sn 11205
£1,575.00 ...Read full description
CategoryAccessories
SubcategoryClothing
ConditionUsed
Price£ 1,575
Sale typeTrade
Manufactured YearVictorian 1902
Your reference11203
Recommended UsageCollection item