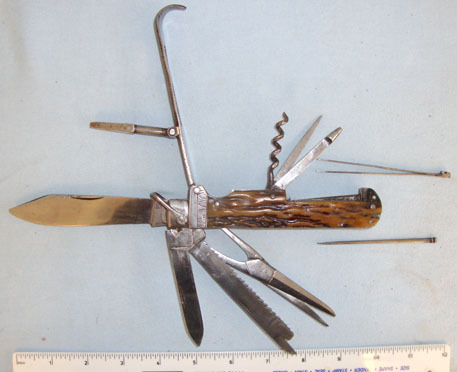 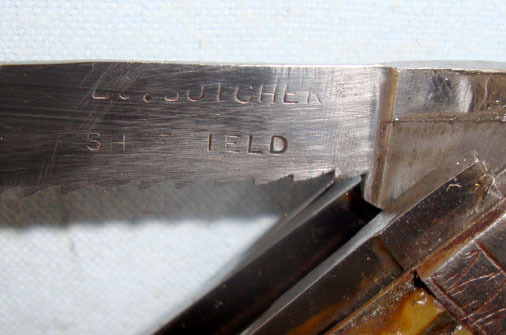 The Butcher Brothers William & Samuel were one of the most enterprising of partnerships in Sheffield during the early 19th Century. Primarily tool makers they gained a very high reputation for making quality knives. In 1819 they are recorded as having premises at Eyre Lane, Sheffield. Between 1830 and 1850 the business expanded to Furnival street and into a large tenement type factory known as the ‘Butcher’s Wheel’. This is a massive Victorian era Coachman’s Multi Bladed Clasp Knife by Butcher Sheffield. The knife has 9 fold out tools and blades including the Hackney Cab Coach door key ( illustrated). The saw blade with screwdriver tip is marked with partially visible manufacturer’s name ‘Butcher Sheffield’. The knife has undamaged Stag horn scales. The frame of the knife has an integral screwdriver tip and slotted into the scales are their original accessories which consist of a steel spike and tweezers. The blades & accessories have staining to be expected with age. With large 4 ½” blade unfolded the knife measures 10” overall length. All blades and tools fold neatly into its steel frame. The frame is fitted with lanyard ring. The price for this impressive Victorian Coachman’s knife includes UK delivery. ED 2211 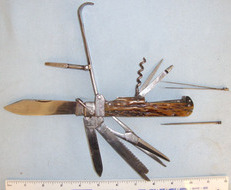