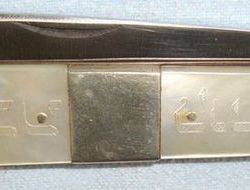 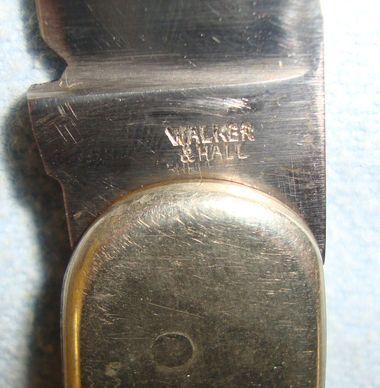 The Sheffield based Cutler George Walker is recorded as operating as a 'knife forger' in 1845. In 1853 the firm was joined by Henry Hall of Worcester and became 'Walker & Hall' based at the Elecro Works in Howard Street, Sheffield. Walker & Hall are believed to have been the biggest employer in the cutlery trade prior to WW1 (see page 284 of The Sheffield Knife Book by Tweedale). This is an excellent folding pen knife by Walker and Hall made post 1900. It has a clean 4 1/2" single edged folding blade and measures 9 3/4" when open. The blade is marked by the manufacturer 'Walker & Hall Sheffield'. It has German Silver scales inset with attractive undamaged Mother Of Pearl sections which are engraved on one side with Cyrillic/ Hebrew Script which is worthy of further research. Price includes UK delivery. Sn 10789