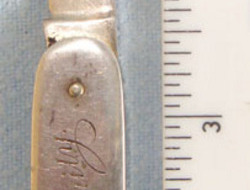 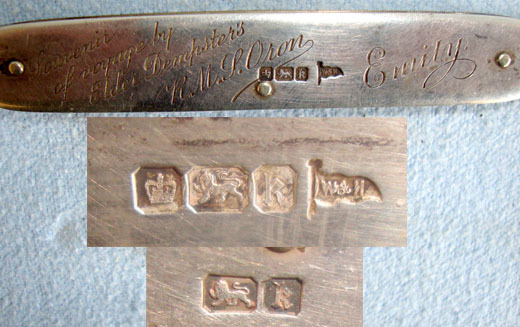 Elder Dempster & Company, Limited, was formed in 1852 as the African Steam Ship Company, Limited, with a contract to carry mails from London via Plymouth to Madeira, Teneriffe and the West Coast of Africa. Elder, Dempster & Company, Limited, was formed in 1910. One of Dempster’s line was the Royal Mail Ship Oron. Built in 1898 the ship was captured during WW1 in 1914 by Germany at Hamburg. In 1918 it was returned to Dempster's and later sold to Spain, renamed Paz de Epalza. This is a contemporary quality souvenier pen knife in remembrance of a voyage on the Oron. It has a solid sterling silver 2 ¾” single edged folding blade and measures 6" when open. It has sterling silver scales. Both scales are hallmarked. The hallmarks are for Sheffield 1902-03 and Walker & Hall manufacturer (the Sheffield based Cutler George Walker is recorded as operating as a 'knife forger' in 1845. In 1853 the firm was joined by Henry Hall of Worcester and became 'Walker & Hall' based at the Elecro Works in Howard Street, Sheffield. Walker & Hall are believed to have been the biggest employer in the cutlery trade prior to WW1. See page 284 of The Sheffield Knife Book by Tweedale). One scale is engraved ‘Souvenier of voyage by Elder Dempster’s RMS Oron Emily’. Price for this knife which is worthy of further research includes UK delivery. Sn 14008