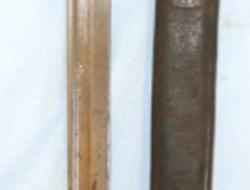 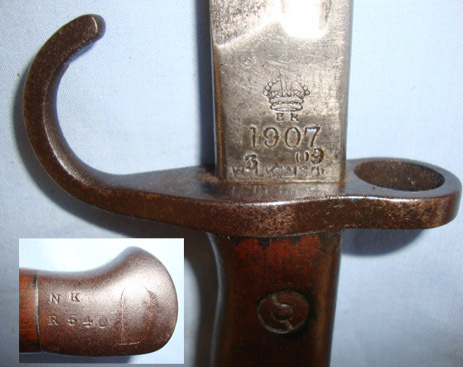 The Norfolk Regiment entered the First World War with two regular, one reserve and three Territorial Force Battalions (one of cyclists), with the Regiment expanding to nineteen Battalions. The Norfolk Regiment also raised many service Battalions during the war who were a part of Lord Kitchener's New Armies. The service Battalions were created specifically for service in the war, believed, at the time, to be the War To End All Wars. The total number of men raised during the war and who served with the Norfolk Regiment amounted to 32,375 of whom 5,576 were killed and many thousands wounded. The Regiment served with distinction on the Western Front and after the war in 1931 the Regiment was renamed the Royal Norfolk Regiment. This is an excellent 1st Type, hook quillon '07' sword bayonet by Wilkinson, complete with original 1st type scabbard. These bayonets were introduced in January 1908 (see page 186 of British & Commonwealth Bayonets by Skennerton). This example was made in 1909, a year after production began. The sword bayonet has a 17" steel single edged blade which is stamped on the ricasso with the Kings crown 'ER' (Edward Rex)and '1907' (pattern) together with date '3 09' (March 1909) and 'Wilkinson' (manufacturer) . On the reverse it is stamped with inspection marks. The bayonet is fitted with its original 1st Type hook quillon cross guard which incorporates a muzzle ring. The wood grips are undamaged secured with two screw bolts. Both grips are impressed with inspection marks. The pommel is stamped 'NK' (Norfolk Regiment) above ‘R540’. It is complete with its original 1st Pattern leather scabbard with steel locket and internal chape. All the stitching and leather of the scabbard are intact. The price for this Regiment marked 1st Type bayonet and 1st Pattern scabbard includes UK delivery. Sn 12170