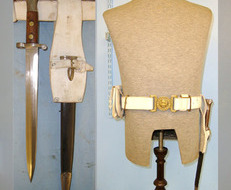 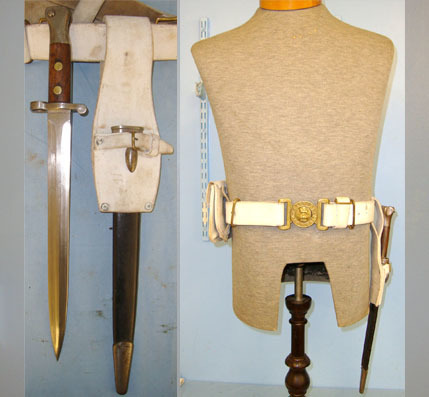 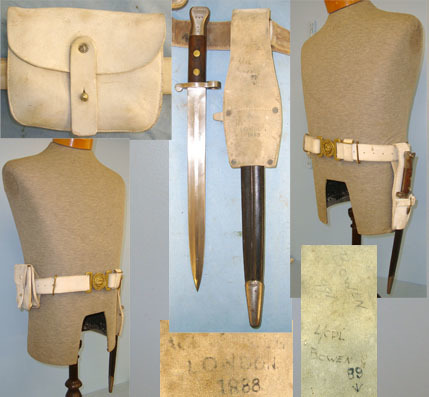 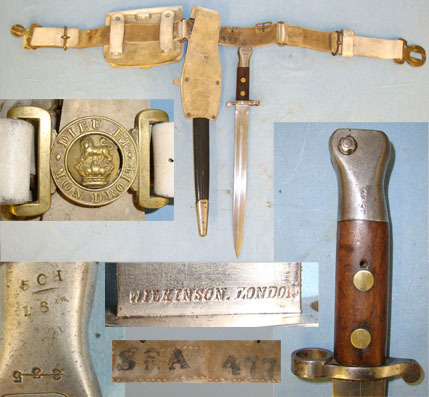 
The Cheshire Regiment was a line infantry regiment of the British Army, part of the Prince of Wales' Division. The regiment was expanded in 1881 as part of the Childers Reforms by the linking of the 22nd (Cheshire) Regiment of Foot and the militia and rifle volunteers of Cheshire. The title 22nd (Cheshire) Regiment continued to be used within the regiment. On 1 September 2007, the Cheshire Regiment was merged with the Worcestershire and Sherwood Foresters Regiment (29th/45th Foot) and the Staffordshire Regiment (Prince of Wales's) to form a new large regiment, the Mercian Regiment, becoming the 1st Battalion, Mercian Regiment. The Cheshire Regiment served with distinction in the Boer wars and both WW1 & WW2. The Enfield Lee Metford, 1888 Mark 1, Type 2 Bayonet was manufactured for the British .303 calibre Enfield, Lee Metford Rifle which were issued to British and allied forces during the Boer war and WW1. This bayonet to the 5th Battalion Cheshire Regiment has a superb clean double edged and unfullered blade with a medial ridge running from the ricasso to the blade tip and the blade is crisply marked by the manufacturer ‘Wilkinson London’. The pommel is stamped with weapon number '16' below Regiment mark ‘5 CH’ to the 5th Battalion Cheshire Regiment. The pommel also has a small WD arrow mark and is stamped ‘’Pat 88’ (1888 Pattern). The undamaged wood grips are secured by 2 brass rivets and have the correct oil hole towards the pommel. The bayonet comes complete with its original black leather scabbard with steel locket & chape. Also included is it's Slade Wallace Equipment, Boer War Era Buff Coloured leather belt with adjustment leather straps and brass fittings which include it's heavy cast circular brass 2 piece Victorian crown with Lion centre piece together with outer band which contains the Latin inscription 'Dieu Et Mon Droit'. The back of the belt has hand written names no doubt the names of Victorian Soldiers who were issued with this rig and WD ink stamps (all illustrated). The belt (approx UK size 32-36" Waist). The belt has its original buff coloured 'Slade Wallace' leather, frog with brass buckle & large single belt loop and leather pouch with flap cover, retaining strap and brass stud fastener . All leather work and stitching of this item are clean and intact. The price for this bayonet to a famous Regiment with Sam Wallace belt rig includes UK delivery. Sn 16196:1
£575.00 ...Read full description
CategoryBlades
SubcategoryBayonets
ConditionUsed
Price£ 475
Sale typeTrade
Makewilkinson london
Manufactured YearVictorian Era
Your reference16196:1
Recommended UsageCollection item