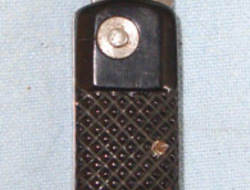 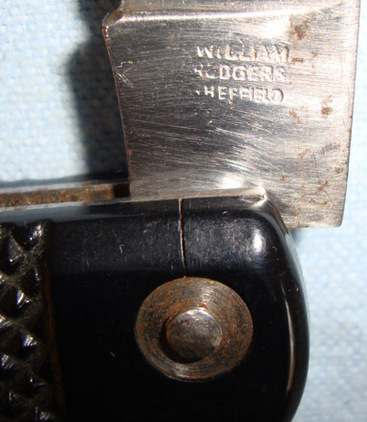 A scarce WW2 British S.O.E. (Special Operations Executive) folding knife with moulded bolster. This knife was manufactured in England primarily for use by the S.O.E. Some of the knives produced don't have a manufacturers name or origin but this one has "William Rodgers, Sheffield" stamped on the blades ricasso (see the second photograph). There were two versions of this knife, one with a black moulded bolster and one with a white metal bolster. This knife has the black moulded bolster. The grips are chequered Bakelite or Bexoid. The bade measures 3 1/2" long, 8 1/4" overall with the blade locked out. The blade folds out and locks in place. It is released with a metal sprung thumb release which works perfectly. The blade is polished steel and is in good condition as can be seen from the photographs. (see page 46-47 in 'British and Commonwealth Military Knives' book by Ron Flook). The price includes UK delivery. Sn 12458