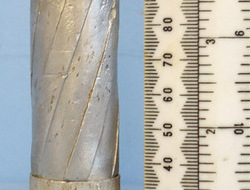 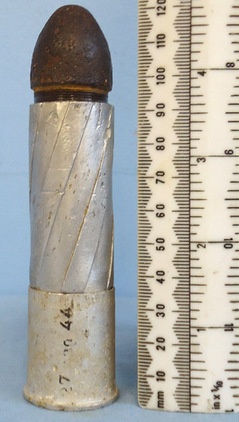 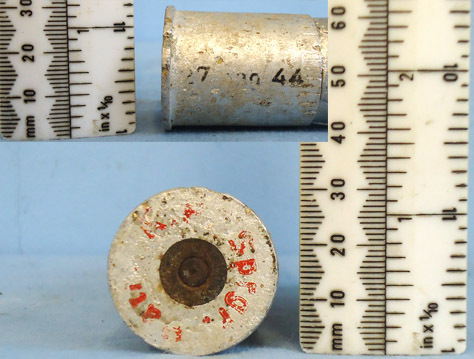 INERT DEACTIVATED. This is an inert German WW2 25 x 35R Nebelpatrone Z (smoke without vent) round for the Walther Kampfpistole ("combat pistol"). This round was used in the Kampfpistole which sometimes had a shoulder stock and was a normal Walther flare pistol specially fitted with a rifled barrel to become the Kampfpistole. The round featured a high / low pressure aluminum cartridge case fitted with a percussion primer. The aluminum smoke projectile was pre-rifled to engage in the pistols rifled barre when loaded. This is a variation where the integral alloy nose cone is replaced with a screw in steel nose cone. The head of the cartridge has red lettering Sprgr ??? ??? . The side of the cartridge is stencilled 27 40 44 .The price includes UK delivery and no licence is required to possess these inert rounds in the UK if retained as part of a collection or display. SN. O 1085