A new pistol is just about to be launched! Described as the “smallest Co2-powered air-pistol in the Galaxy!”, no surprises that this is going to be really rather tiny and may even set a new record.

There have been very small air pistols before, but those were fed by compressed air cartridges and single shot only. But Co2 fed and a repeater? The new air pistol will be called the Atom 8,  a 4.5mm Co2 powered all-metal air pistol designed as a BB repeater. It can also be used single shot as the barrel tips up for loading dart ammo. A Canadian outfit called Goblin Air Sports has been responsible for dragging this off the drawing board, and in preparation have now also set up shop in Las Vegas, Nevada. Some years back these guys released the diminutive airsoft weapons called the Deuce and the Solo. Getting blasted by one of those fun guns in the so serious mil-sim games scene would bring a smile to even the toughest hardcore CQB fanatic; actually maybe not, as most them guys are seriously nutty!

Moving away from green gas, Goblin has invested time and effort to get their new design atomised into an even smaller size whilst using more powerful and serious carbon dioxide gas. To manage this, they’ve opted for the smaller 8-gram capsule hence the 8 in the gun's title name,  shown in these production sample photos. 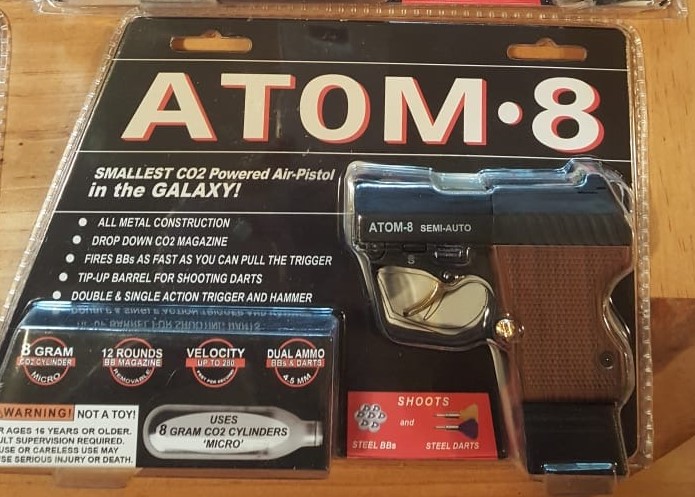 Packaging designs - you may see this soon.

This was the original sparklet or gas can as used on the first capsule fed Co2 pistol from the early ‘50s in America called the Schimel GP-22 and before the introduction later of the now common 12-gram size. Today, most 8-gram size Co2 bulbs available here are typically sold through tyre inflation and beer making suppliers and are very easy to find. Most likely sources of these and certainly the latter will be food grade without lubricant, so adding a little Pellgun Oil or similar to the tip of the bulb before piercing will help the valve piercing and internal stem seals last. In fact on the last look-see, Goblin is planning to release their own dedicated line of airgun friendly 8-gram bulbs in little 'Goblin' logo card boxes.

Having cracked the size issue in the power plant, this allowed for neater magazine design and yes, the Atom 8s will have a drop-free unit as these images of early units planned for the release show. Everything is there as on a bigger air pistol magazine but in tiny proportions. Filling up with a gas bulb and all 12 BB's, the mag is inserted back into the frame and ready to roll. The pistol has an external trigger bar reaching back behind the right-hand grip. This is as seen on some other firearm designs and air pistol clones such as the CP88 and Beretta 92FS. So yes, you guessed it, as with them, single and double action come as standard on the tiny Atom 8. The barrel assembly has a latch which releases it up, tipping forward at the muzzle. This allows single shot use for a dart to be inserted into the inner smoothbore barrel held within its separate block - although it’s more than likely that UK airgunners may well experiment with sized pellets. 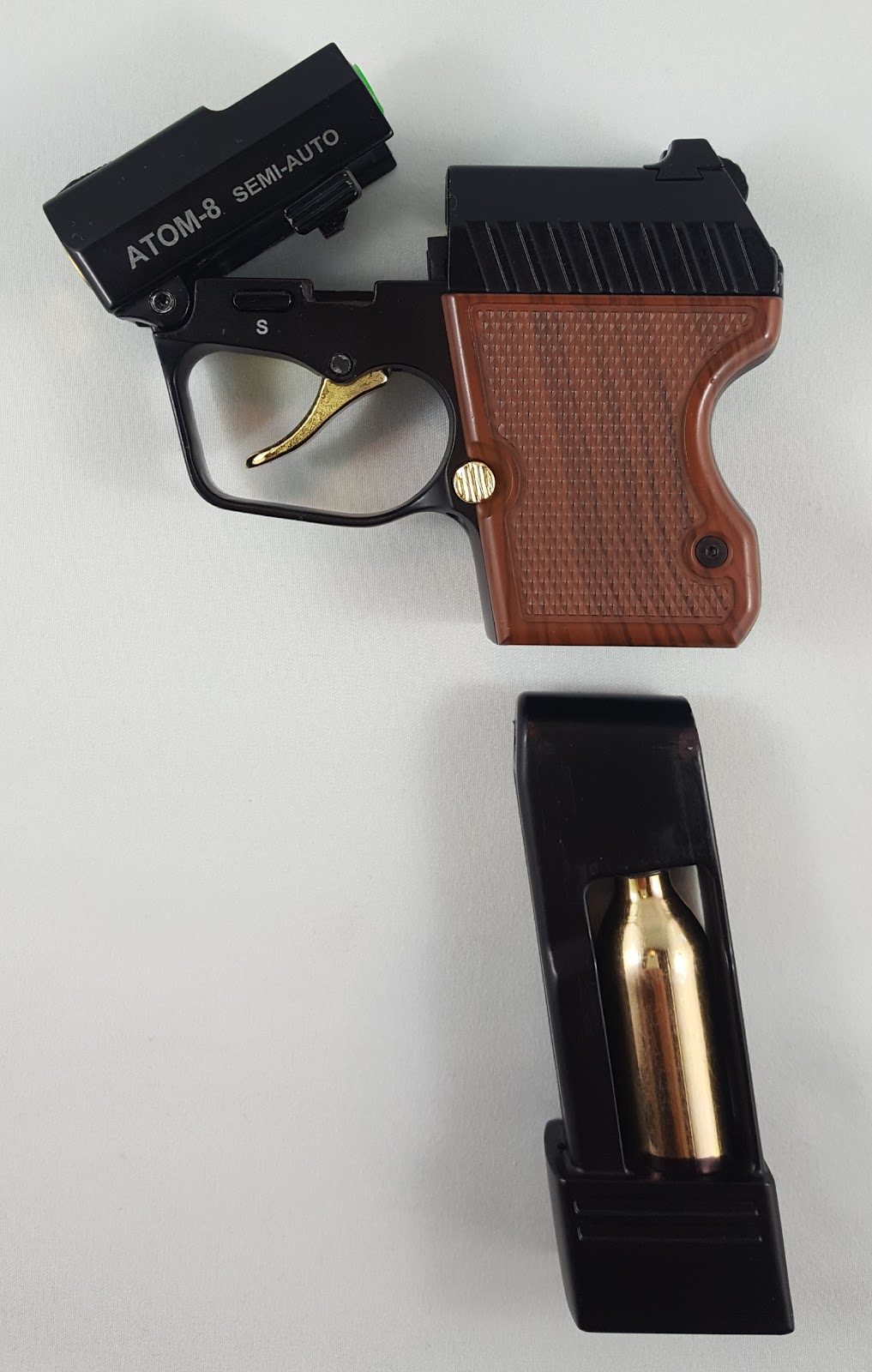 For a Co2 BB blaster the barrel is advertised as having a “solid steel barrel with precision-honed bore”. Most Co2 BB pistols use a cheap metal straw tube, so this is welcome even if only to maximise accuracy with steel BB’s. Many pistoleros unhappy with the performance of steel balls in any particular BB barrel have already experimented with the lead ball in their bb guns.  Lead ball is available in a number of other different sizes within .177 category such as 4.4mm and 4.46 mm as well as 4.5mm, which allows some fine-tuning to each BB barrel. Primarily this is to avoid jams, but also to lessen any rattling down the barrel common with BB tubes, so improving accuracy and as a freebie, also giving better fps. The Makarov 654k is one prime example of this in all these respects. The images of the Atom 8's smart looking and very solid barrel are certainly surprising for a BB blaster.

Given the frame's tiny size, there will still be a safety provided and the other interesting thing is how the Atom 8 is put together in sub-assemblies. This means the pistol dismantles down - what little there is of it! The barrel assembly comes away and the inner barrel can release out, and the rear slide removes likewise. At the time of researching, the plan was to have a few accessories included with each unit. Power output will be an advertised 280 fps, it weighs around half a kg which for something so tiny will give it a real presence and a feeling of quality. As for things like shot count, who gives monkeys, just gimme one now! 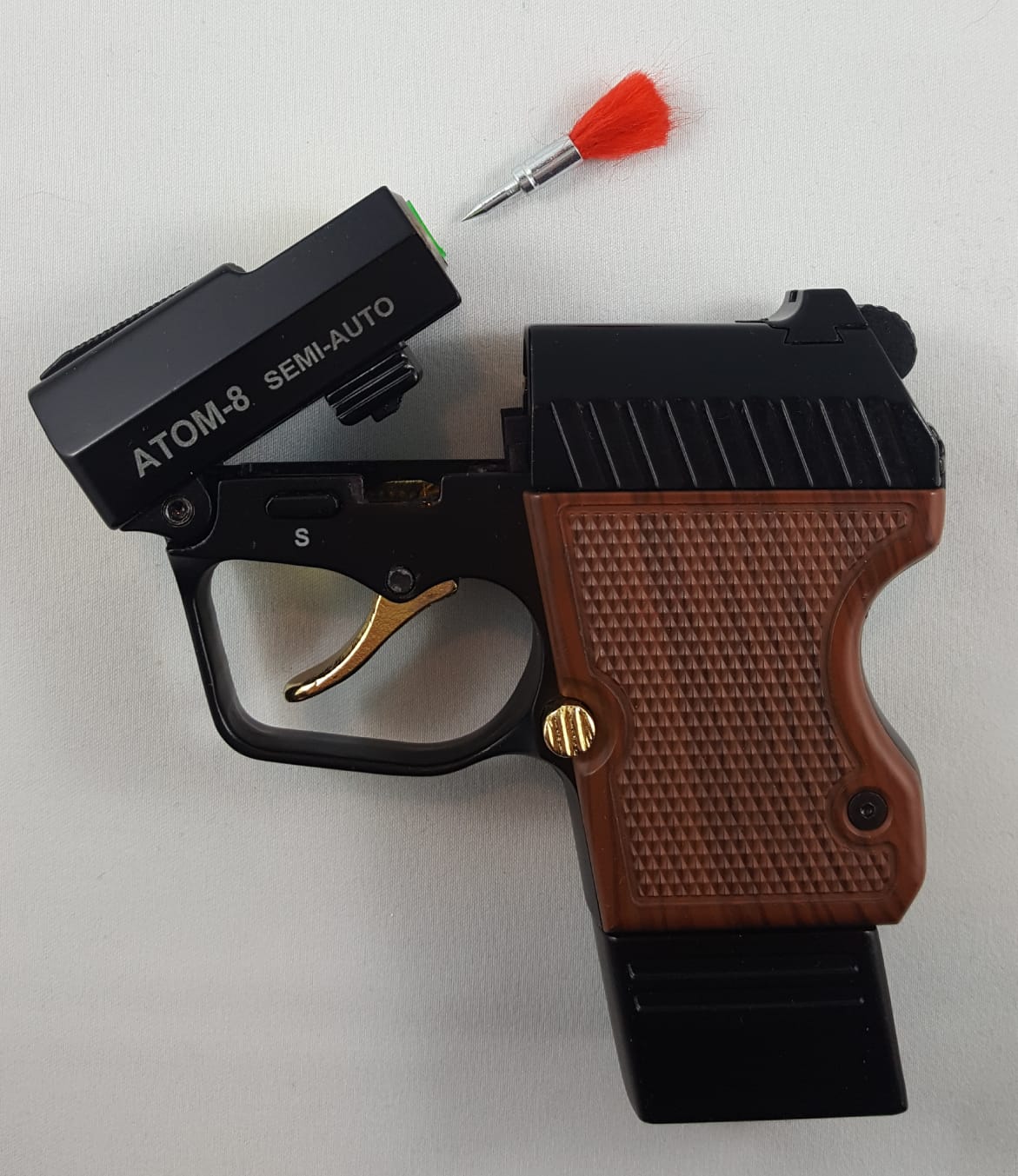 Already described as 'The Smallest Co2 Powered Air-Pistol in the Galaxy', the nearest thing to this little pistol was an American design from over 40 years ago that looked something like a tv remote control – from the 1970s. The Co2 fed Jaguar Arms Cub was a single shot pellet pistol seen possibly as a novelty on its release but over the years it drew more and more attention from collectors. The Atom 8 will sadly knock it off its pedestal. Looking online, we should have had this in the shops but after gearing up, COVID-19 hit. Let’s hope things pan out and we get to see the tiny Atom 8 very soon! 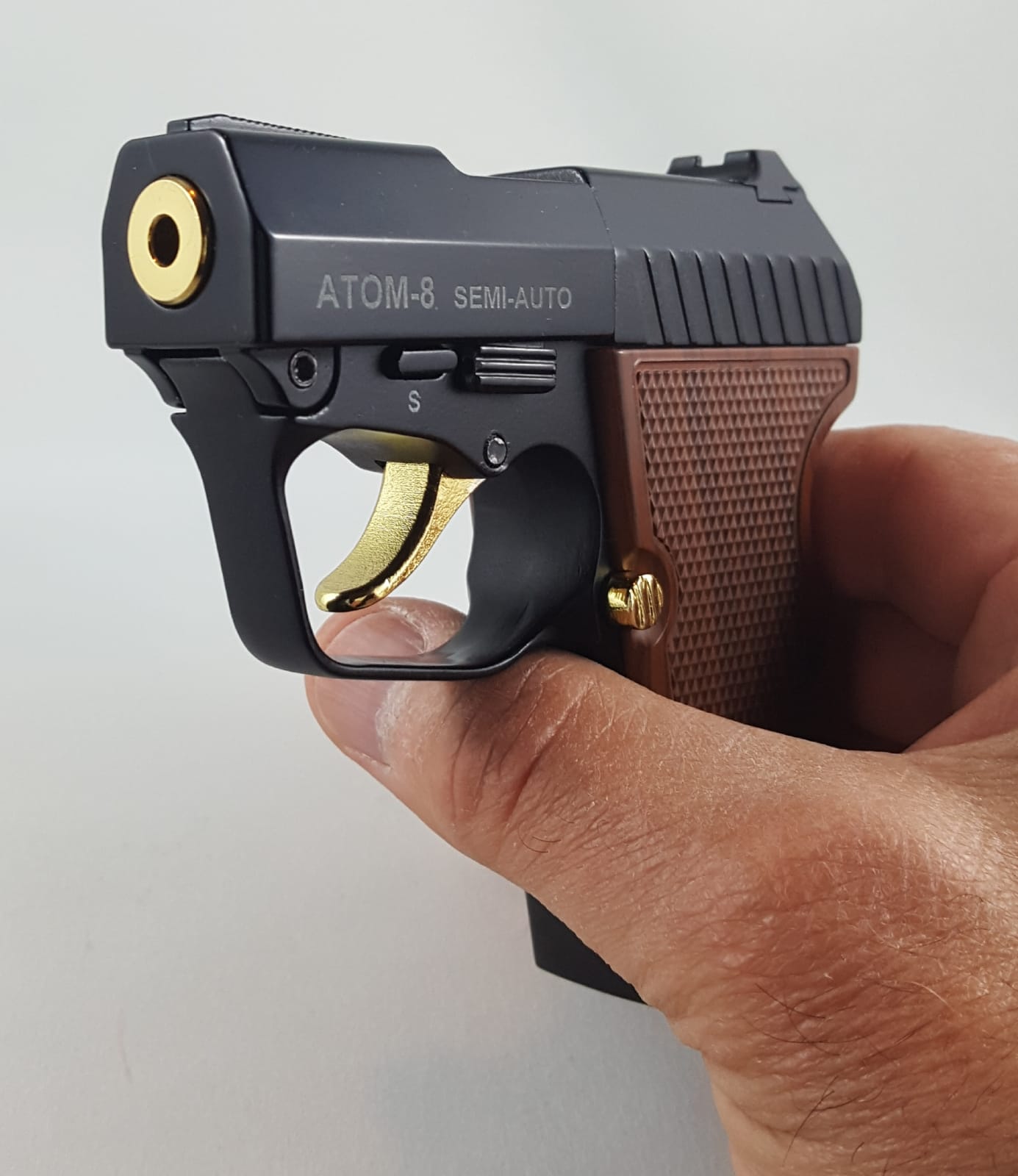 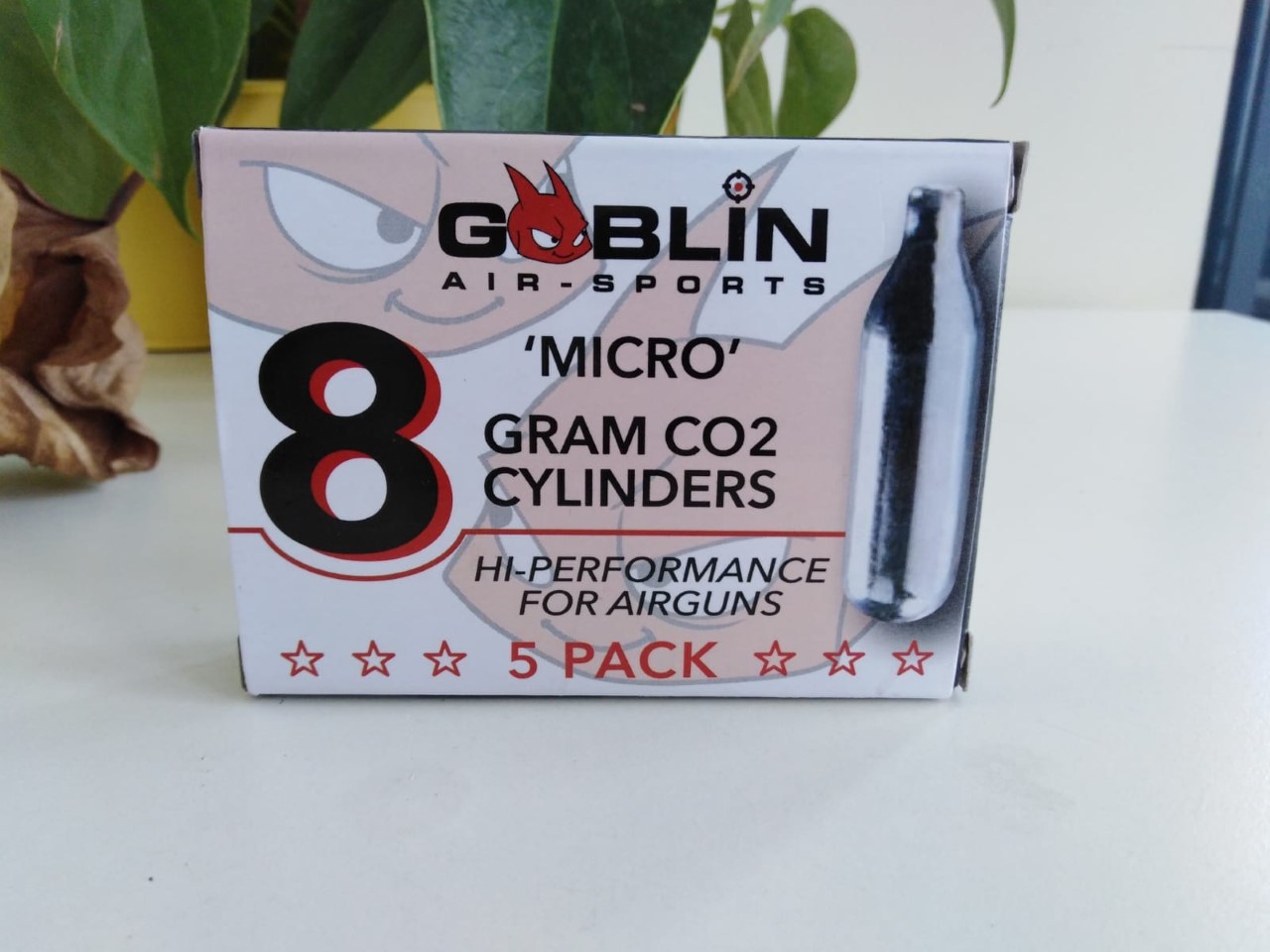 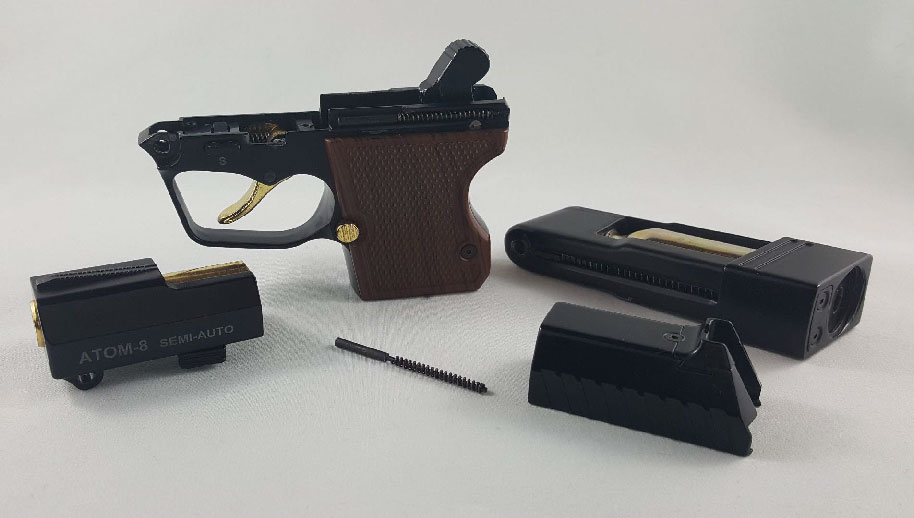