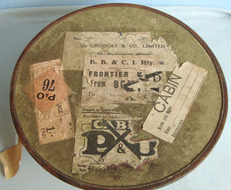 
This is a WW2 period aluminium wash bowl and leather bound top which belonged to Major F. C. Green M.C. of the Royal Tank Regiment. The Royal Tank Regiment (RTR) is the oldest tank unit in the world, being formed by the British Army in 1916 during the Great War. Today, it is the armoured regiment of the British Army's 1st Armoured Infantry Brigade. Formerly known as the Tank Corps and the Royal Tank Corps, it is part of the Royal Armoured Corps. Major Green was in the 4th Royal Tank Regiment. The 4th and the 7th had been destroyed fighting side by side in Tobruk but the Army Board took the decision that neither would be lost in the Order of Battle. It was a singular recognition of what they had together achieved during their remarkable history. This washbowl and top is complete with labels, one brown label attached by string showing it was owned by "Major F. C. Green MC Royal Tank Regt. Empire Ke. - Port Said" and on the reverse "Via Liverpool St and Waterloo To Southampton Central". The top is 16" across with a leather rolled stitched edge. One label says "Cabin". The washbowl top is in excellent condition. It has four leather tongues through which a thin leather strap is threaded and secured with a steel buckle. The aluminium basin is 15" in diameter and is 4 1/2" deep. It is in good condition. It is nicely stamped with "British Made Diamond Pure Aluminium". The price includes Uk delivery. Sn 14334
£195.00...Read full description
CategoryAccessories
SubcategoryOther Accessories
ConditionUsed
Price£ 195
Sale typeTrade
Manufactured YearWW 2 era
Your reference143354
Recommended UsageCollection item