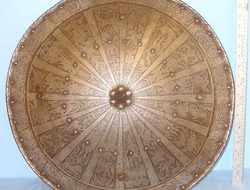 
The Victorian era saw a revival of interest of objects from the renaissance and ancient medieval cultures that influenced architecture, decoration, furnishings and art. This renewed awareness led to an intense affinity of arms and armour from those periods of history and production of quality authentic reproduction arms and armour. This is a fine medieval / renaissance form battle shield. Its excellent quality and form indicates that it is either a Victorian reproduction or possibly a much earlier piece. The iron shield is 23” diameter with a rope effect and riveted rim. The surface of the shield is elegantly convex and has a pyramid form 3” spike in its centre mounted on a stylised rose form boss, which in its original form would allow the carrier to strike opponent’s, allowing the shield to be used for both defence and attack. This form also provides strength to the structure and would assist deflection of striking weapons. The whole surface of the shield has beautifully etched panels in the Italian Renaissance style featuring religious, hunting, and battle iconography. The shield retains its original shape and original 4 carry strap lugs. The rear of the shield has its original leather riveted padding and a later steel wire carry handle or wall hanger cord secured to 2 of the lugs. The shield has even patina and no damage. Price for this quality shield worthy of further research includes UK delivery. Sn 13597
£975.00 ...Read full description
CategoryAccessories
SubcategoryOther Accessories
ConditionUsed
Price£ 975
Sale typeTrade
Manufactured YearVictorian Or Earlier Medieval / Italian Renaissance Form
Your reference13867
Recommended UsageCollection item

In our community section
More about this: Game meat is growing ever popular, with an increas...