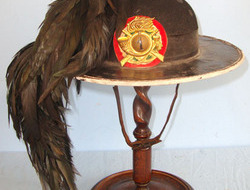 
The Bersaglieri (Marksmen in English) are a corps of the Italian Army originally created by General Alessandro La Marmora on 18 June 1836 to serve in the Army of the Kingdom of Sardinia, later to become the Royal Italian Army. They have always been a high-mobility light infantry unit, and can still be recognized by the distinctive wide brimmed hat that they wear (only in dress uniform in modern times), decorated with black capercaillie feathers. The feathers are usually applied to their combat helmets. Another distinctive trait of the Bersaglieri is the fast jog pace they keep on parades, instead of marching. Italy began the Second World War with 12 Bersaglieri Regiments of three battalions each. Over the preceding years the Army had resisted suggestions to dilute their quality, and recruits continued to be of above-average size and stamina, endured intense physical training and had to qualify as marksmen. The Bersaglieri fought in southern France and then in Greece, later, Bersaglieri Regiments were also deployed on the Eastern Front. One Battalion of Bersaglieri participated in the East African Campaign. This is an original WW2 Era Bersaglieri Hat. The helmet’s body, sweatband, lining and leather chin strap are clean but have areas of surface wear consistent with age. The front of the helmet has its original large gold coloured metal plate with Number ‘1’ to the 1st Bersaglieri Light Infantry mounted on a cloth rosette in the colours of the Italian flag. The hat has its original leather chin strap with buckle and is mounted with the correct original Capercaillie Feather cockade. The helmet is approx UK size 7. Price includes UK delivery. Sn 13203
£475.00...Read full description
CategoryAccessories
SubcategoryClothing
ConditionUsed
Price£ 475
Sale typeTrade
Manufactured YearWW 2 era
Your reference13203
Recommended UsageCollection item