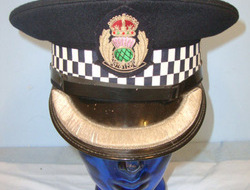 
The Association of Chief Police Officers in Scotland (ACPOS) ceased to operate on April 1, 2013 when the eight forces and the Scottish Crime and Drug Enforcement Agency merged to form a single service known as Police Scotland. ACPOS was the collective organisation of Chief Constables, Deputy Chief Constables and Assistant Chief Constables from the eight Police Forces in Scotland. The Scottish Constabulary crest was designed by Mr Cairns, Art Master at Dumfries Academy in the early 1930s at the request of the Chief Constables' (Scotland) Club to be a badge to be identifiable with the Scottish Police Service. This is an original Scottish Constabulary ACPOS Senior Police Officer’s Cap. The cap has the ACPOS embroidered bullion Scottish Thistle cap badge topped with King’s Crown indicating manufacture prior to 1952 with banner and latin motto ‘Semper Vigilo’ (Always Vigilant). The badge is illustrated in image 2. The hat has a black plastic chin strap held by two black buttons to the sides and patent leather peak with bullion braid. The braid has some service wear. The cap’s crown, body and chequered headband are in excellent undamaged condition with no mothing. The inside of the cap has a clean brown leather sweat band with number ‘189’ handwritten in ink and crisp Christy’s of London impressed stamp highlighted in gold (illustrated inset in image 2). The clean red silk head lining also has a crisp Christy’s ink stamp in gold. This is an excellent original Police cap. The price includes UK delivery. Sn 12146
£295.00 ...Read full description
CategoryAccessories
SubcategoryClothing
ConditionUsed
Price£ 295
Sale typeTrade
Manufactured YearPre 1952
Your reference12146
Recommended UsageCollection item