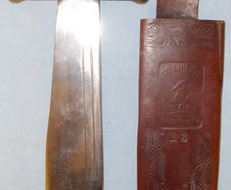 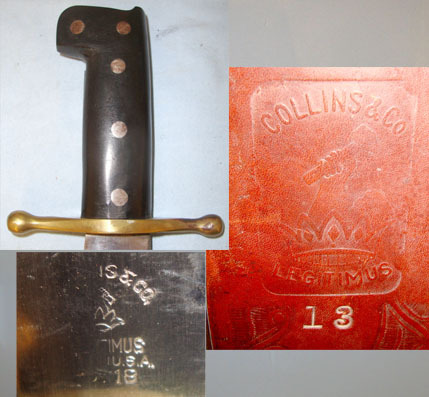 An original WW2 United States V-44 Combat and Survival Bowie knife by Collins & Co (see page 136 of Cole’s book U.S. Military Knives Book III & page 139 number 231 of ‘United States Military Knives Collectors Guide’ by Silvey & Boyd where a Collins & Co example is described as rare). Officially a survival knife the U.S. Marine Corps used them as a fighting knife against the Japanese. It is a large knife measuring 14” in length and with a black synthetic slab sided handle secured by 5 rivets. It has a brass cross guard. The Bowie type blade is 9 ¼” length with drop point and twin fullers. The blade is marked with partially visible manufacturer’s mark ‘Collins & Co, Crown & hammer trademark, Legitimus Made In USA No.18’ . It is accompanied by its brown leather scabbard with rear riveted belt loop. The scabbard has tooled decoration and to the front is embossed with Collins & Co name and trademarks (all illustrated). All leather and stitching of the scabbard are intact. The price for this rare Combat / Survival knife includes UK delivery. Sn 14588:4