It was February 2018 when I first discovered the BSA defiant, Birmingham Small Arms foray into an ever-increasing bullpup market, and some may say they were late to the party but that might have been a good thing.

The Defiant was stuck to the display stand so handing the rifle wasn’t going to be an option, it was also well guarded by what looked like two characters from the NETFLIX show Peaky Blinders, and no matter how hard I thought about it I couldn’t for the life of me work out the correlation between the defiant and the two well-dressed gentleman. 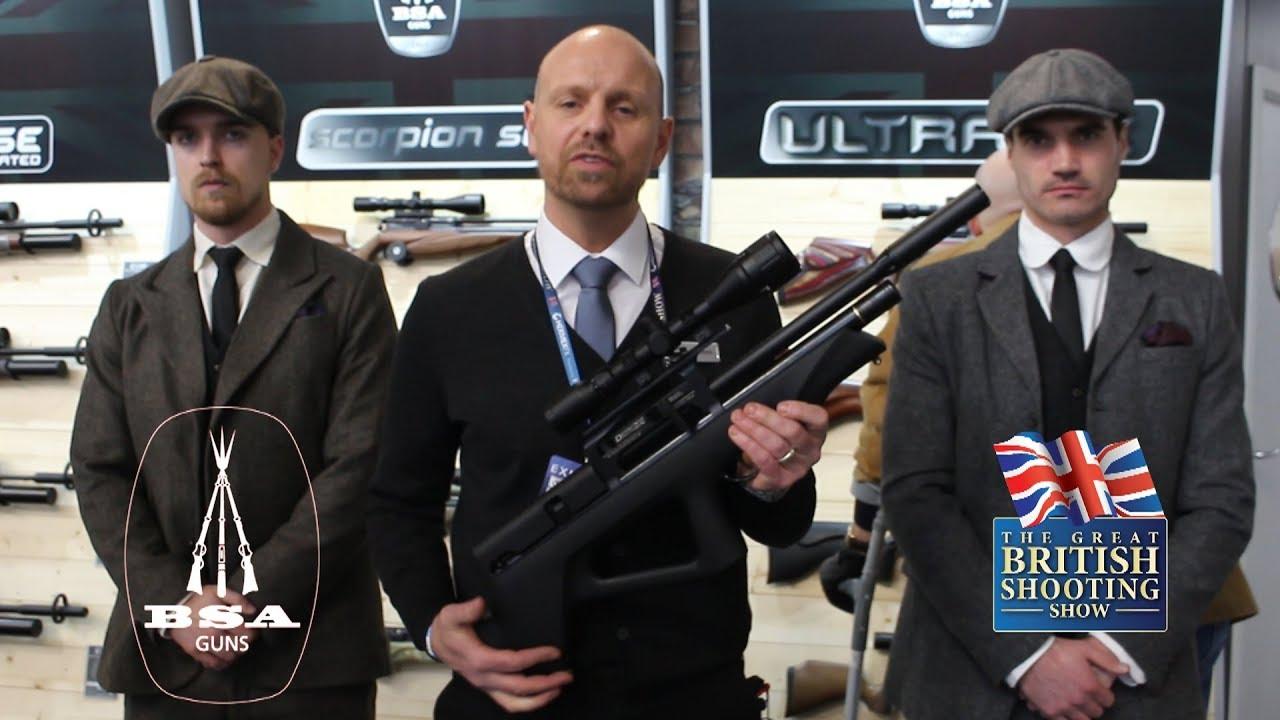 The Defiant looked the business, with its black anodised action, rubber cheek piece and pepper laminate stock, coupled with the BSA patented CCS shroud and silencer system, the bullpup stood out as it became the go to Item on the BSA stand.

With a Recommended Retail Price (RRP) of £1049 for the rubberised black stock and walnut version, and an RRP of £1099 for the Black Pepper Laminate version, the bullpup appeared to be reasonably priced, with the bonus of a spare magazine and hard case thrown in, this bullpup was most definitely a bargain. The hard case the Defiant is supplied with is very durable and well padded, the shroud and silencer come as standard, meaning the Defiant just needs a scope, ammunition and a charging source to get up and running.

Unfortunately for me I already owned a bullpup, one of the Daystate varieties and could not justify the need to purchase another. I’d already convinced the Missus I’d won a new rifle in the club competition only the weekend before, and I was winning new rifles every other week for the past few months now; she had started to suspect something wasn’t quite right,  maybe I wasn’t the best shooter in the north west and I was acquiring my rifles by some other means. I think replacing the groceries in the fridge with rifle ammunition may have given the game away, having spent all my hard-earned wages on guns and ammo, pellets were becoming difficult to swallow.

I spent the next 8 months trawling through the second hand section of the airgun forums and second hand gun sale websites, until I stumbled across exactly what I was looking for on Gunstar.co.uk, a used .22 BSA Defiant in a Pepper Laminate Stock. The advert listed the rifle as in good condition, and the rifle came with a nice Hawke scope at a bargain price I couldn’t refuse. Having travelled to Liverpool, I met up with a nice young chap by the name of Nicky, and spent the best part of an hour talking to him about the Fury vs Wilder fight before taking the rifle out for a test run. The second hand rifle was missing the spare magazine and an adaptor for the CCS shroud, however after purchasing the rifle for a further reduction I agreed with Nicky, I was more than pleased with it. I soon replaced the missing bits via the infamous auction site.

Now that I’ve had the rifle in my possession and shot it exclusively through the winter months, I feel I’m able to share my opinion with you the reader. My first impression when handling the Defiant was, I remember thinking it’s a small bullpup only 787.4mm (31 Inches) long in length, but what it lacks in length it makes up for in height and weight. Weighing in at 9.5lbs (4.3kg) it’s a bit heavier than what I’m used to, and with the Hawke scope attached the combination weighed in at just over 11lbs (5kg).

The height of the bullpup is increased due to the raised dovetail rail, which is a common feature on many bullpups. The rail allows the user to mount a larger scope on low scope mounts, more recently I was able to mount a 60mm objective lens scope to the bullpup, setting the centre line of the scope as close to the bullpup barrel as possible. 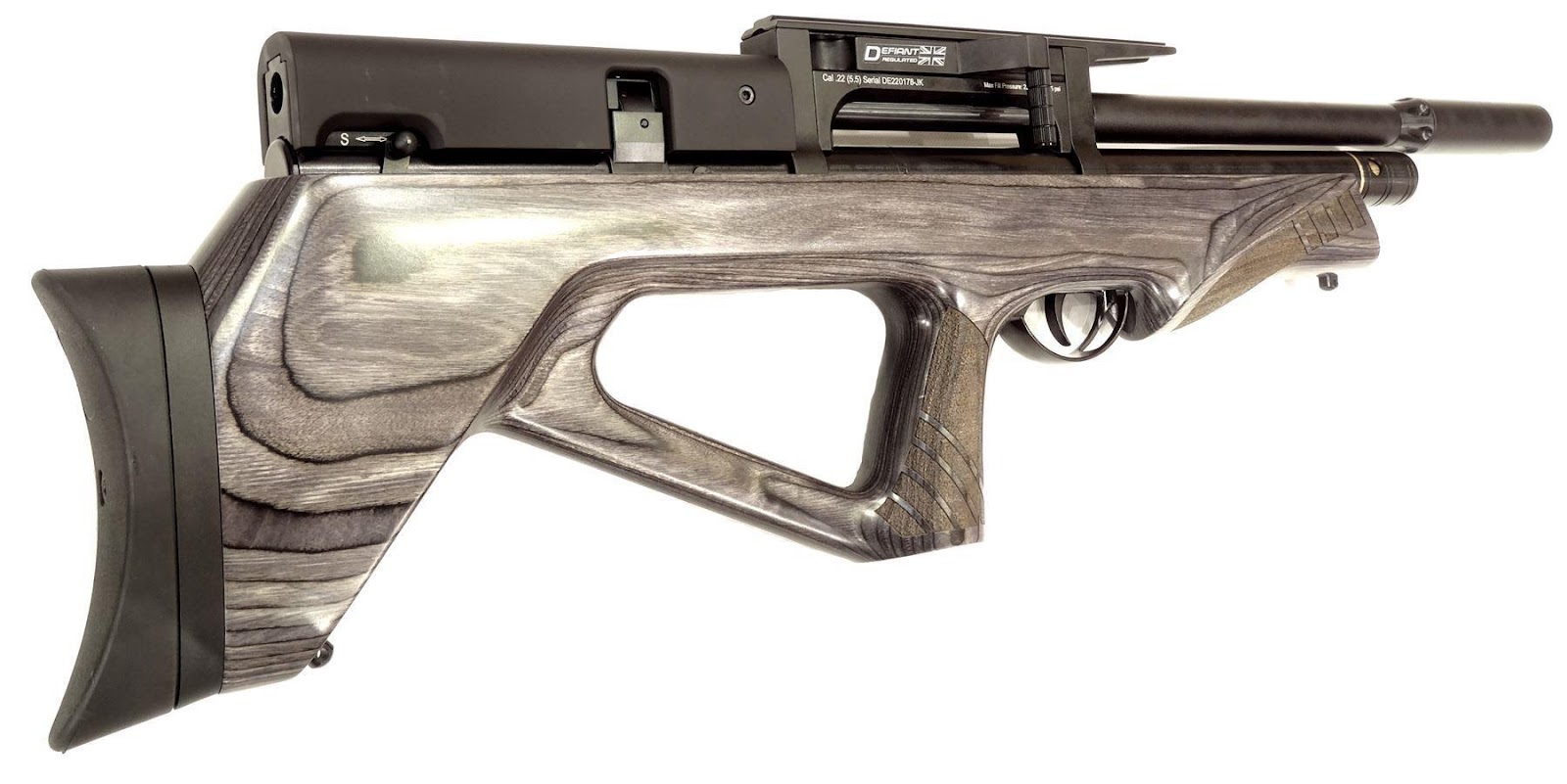 The rifle is equipped with the BSA world class match accurate Cold Hammer Forged Barrel (CHFB), covered with the Custom Configuration Shroud (CCS) and silencer combination which comes with the bullpup as standard. Having dry fired the Defiant with and without the silencer, I can confirm the small silencer works, but isn’t as effective as some other silencers available on the market today. BSA may want to consider increasing the internal volume of the silencer to reduce the report of the bullpup further, however this may detract from the compact form of the Defiant, something BSA are definitely trying to maintain through the well balanced, unique and ergonomically designed bullpup.

The action of the rifle has been very well thought out, BSA have positioned a robust side cocking lever on the right hand side of the rifle, the cocking lever has a vertical rotating handle which means the lever doesn’t slip and rotate in the fingers when the bullpup is being cocked, a firm grip with the fingertips and a pull backwards effortlessly cocks the Defiant. When first operating the lever, I was amazed at how conveniently located the cocking lever is, half way down the bullpup. This meant I wasn’t awkwardly reaching for my ear and bending my right arm uncomfortably, I was happy operating a bullpup without wishing I had a double-jointed elbow. 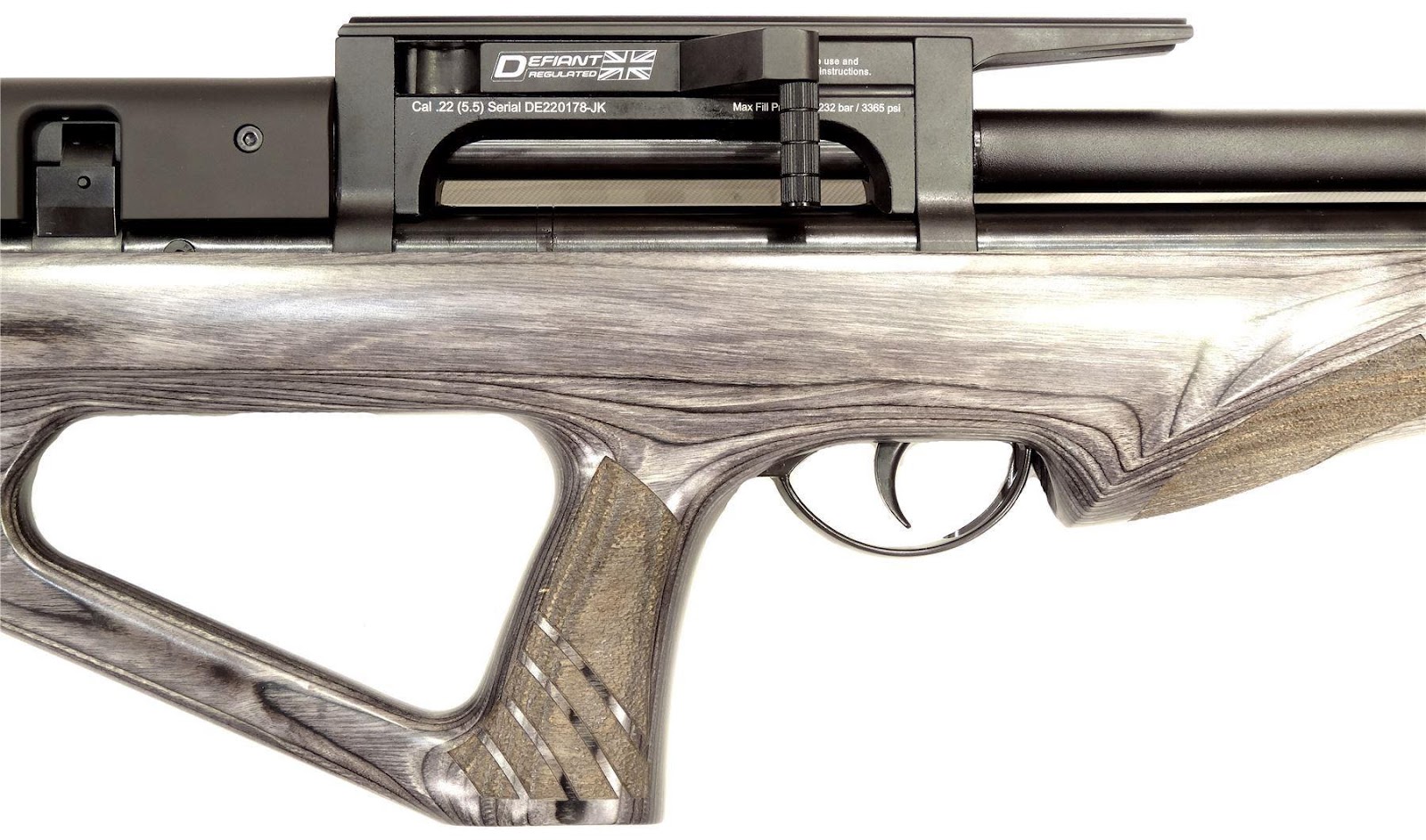 The large action block is covered with a rubberised cheek piece and this also has a slot for the newer improved self-indexing BSA 10 shot magazine. However, the cheek piece wouldn’t sit well against my face, although not uncomfortable when I shouldered the bullpup, Instead I found I’d have to rotate my head to the right slightly to obtain the optimum position I needed to look down the attached scope. The square cheek piece offers very little adjustment to the shooter.

Another thing I noticed was the bullpup was missing the usual BSA magazine retaining pin, instead when I inserted the magazine, I felt the action pull the magazine in, then realised the magazine was being retained via some kind of magnetic force. Looking into the magazine slot I was unable to locate the magnet, but I'm convinced it's in there somewhere and not just a Jedi mind trick. Nevertheless the mechanism works perfectly and in eliminating the previous retaining pin is a vast improvement in design.

The action comfortably sits in an ergonomically designed ambidextrous stock designed by Minelli of Italy. The vertical pistol grip feels just right in my large hands, as does the curvature of the foregrip. The patterned stippling on the stock is also well done and perfectly placed, offering the operator some added comfort with gripping the bullpup. Laminate stocks seem all the rage these days, once a prerequisite on target rifles now a luxurious must have on all things that go click, and bang. I’ve also become more familiar with thumbhole stocks; something I detested many years ago yet this has a skeleton stock feel and look about it, but it works, and over the past few months, has grown on me.

Running parallel Under the CCS shroud is the short air reservoir; this encompasses the filling valve system and manometer at the front business end of the bullpup and a regulator at the rear toward the action of the Defiant. Yes, the Defiant is regulated as standard and the small reservoir means the bullpup offers 120 shots in .22.

Filling the rifle couldn’t be easier with the accompanied fill valve, opening the port is just as easy, by rotating the valve cap and uncovering the port.

Two things I haven't yet mentioned are the trigger and the linkage mechanism required to make the trigger function or the bullpups safety switch. The trigger is two stage adjustable and like many bullpups before it’ll somehow be connected to the rear usual position via some clever linkages currently concealed under the action and inside the stock. I didn’t remove the stock, hence cannot comment on it any further, but what I will say is the previous owner confirmed he had hardly used the defiant and hadn’t altered the trigger in any way; it was as set up at the BSA factory and for me offered the shortest of creep followed by a nice clean crisp break; perfect and just what I was used to with other BSA airguns I‘ve owned and used.

For those of you who have owned or used one of BSA’s PCP’s, say an R10 or an Ultra, will be familiar with the location and operation of the safety switch (not button). How it works on the Defiant is a mystery, again concealed under the action and in the stock, without taking the stock off I can't comment on how it does what it does, but thumbing it forward when taking a shot is easy and engaging it with the index finger when making the rifle safe is easier. The safety catch however, doesn’t automatically engage when cocking the bullpup. 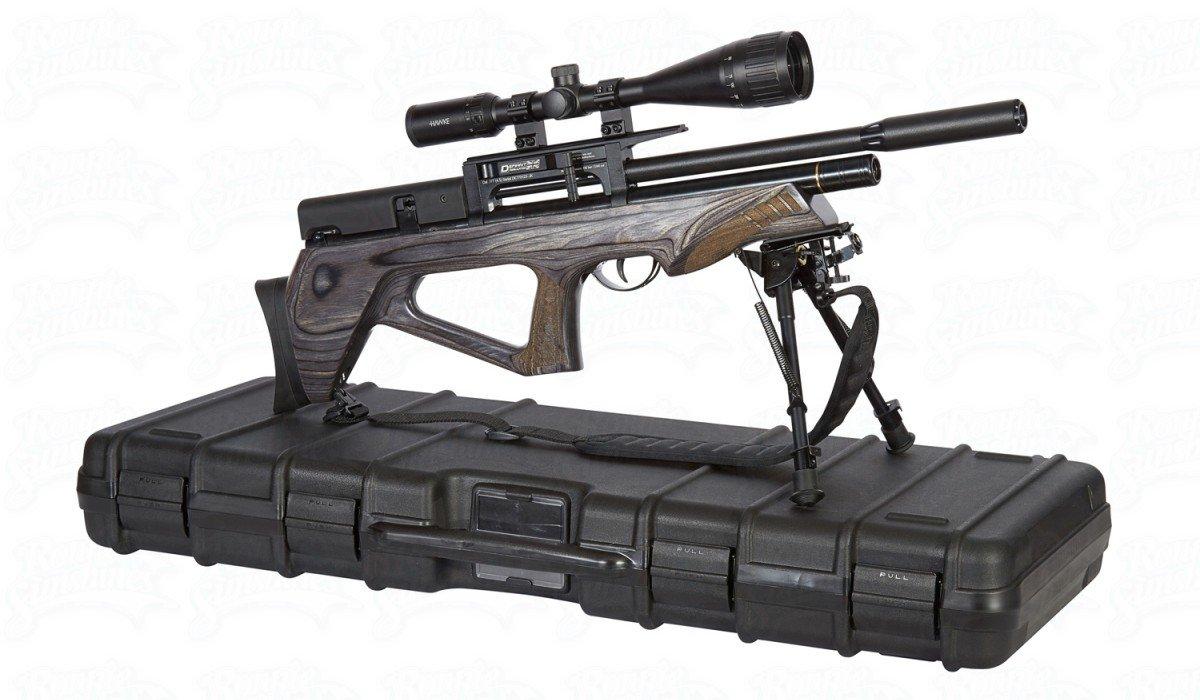 In the field the rifle performed perfectly - ducking in and out from behind trees whilst stalking rabbits, magpies, wood pigeons or crows was effortless - and I found using a sling to take some of the bullpups weight helped, whilst taking advantage of the sling studs the Defiant comes fitted with. Shooting from a hide or from the open window of the shooting wagon was also very comfortable; the short bullpup made quick work of any quarry it was being aimed at.

Things got a bit trickier when lying in the prone position or when trying to shoot the bullpup from a bench. The tall design of the Defiant did not lend itself well to target shooting, yet I was able to put the accuracy of the bullpup and the regulator through its paces over the chronograph and on target paper.

I filled the rifle to 230BAR and shot one hundred unsorted .22 (5.51 head size, 15.89 grains) JSB Jumbo Exact Diablo Pellets through the rifle whilst recording the first 40 shot results through my handy Combro Chronograph. The results are illustrated in the chart below: 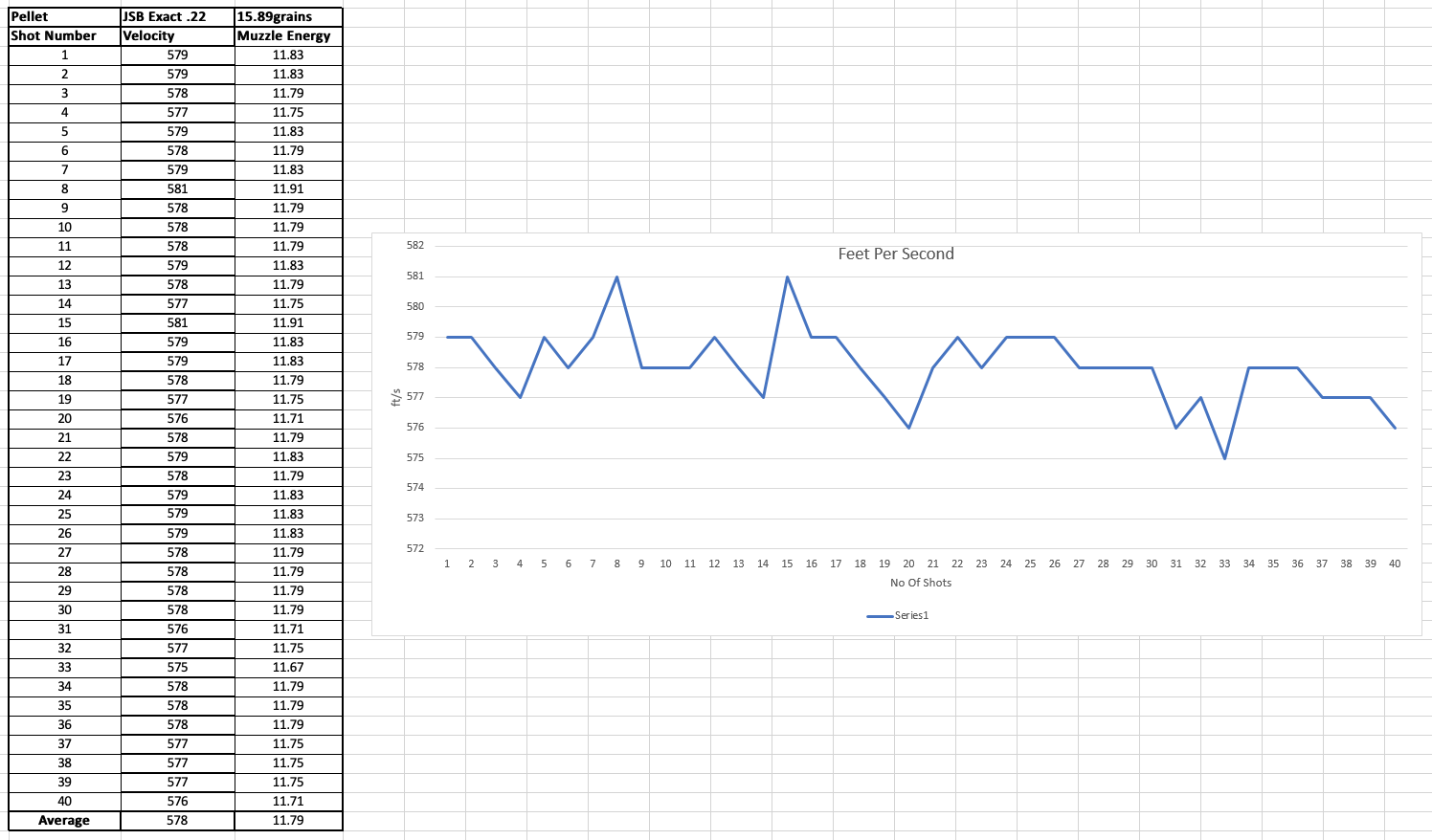 The Defiant proved to be very consistent or as consistent as I’d have expected it to be, I would however be inclined to ask BSA to change the technical specifications to read 90 shots in .22 at best - not the 120 that they’re currently boasting. I felt the power falling off at 90 as the pressure needle crept into the red zone of the monometer.

The accuracy of the rifle was unquestionable as I managed single shot holes at 15 and 25 yards, then cloverleaf shaped holes at 35 and 45 yards. The Defiant offers reliable consistent shot per shot accuracy for a bullpup designed only for the hunting application. The Defiant itself assured me, in the few months I’ve owned and used the bullpup, any well-placed shot on any legal licenced quarry wouldn’t require a second shot, as missed shots were few and far between.

My final thoughts on the BSA Defiant without being a brand snob or a BSA fan boy. I’m pleased to say the Defiant is by far one of the top three Bullpups I’ve used to date; it has everything I’d ever need in one package and is reasonably priced. My only fear is the regulator may in time go the same way the regulator in the early R10’s did. Will I use the Defiant again or will I stick it in the second hand section of the GUNSTAR sales pages? I’m not yet convinced it’s a keeper, only time will tell.

I hope you enjoyed this review and as always; shoot straight and shoot safe.