Advice Rifles
Gun Dealers Gun Shops Shooting Grounds Shooting Accessories Antiques/Militaria Shooting Instructors Gun Repair
All service types >
Business types
Regions
Favourite ads
Last viewed
Saved searches
Last searches
Ads that you mark as favourite will be shown here.
Come back here to remember your latest viewed ads.
When you browse ads, the searches that got you there will show up here.
Your saved searches will show up here.
Home / Community home / Advice / Watch: The Difference between ...
Be a contributor
Advice

Watch: The Difference between a Field and a Sporter by The Gun Shop

Hello and welcome to The Gun Shop, I'm John and I'm here today to talk about the difference between a clay gun and a game gun or a field and a sporter. A field gun and a game gun are the same things. I suppose it depends very much on where you're from, who the gun’s marketed towards, whether they’re going to call it a field or a game gun, but just for now let’s call it a game gun because that’s what it is in my head anyway.

A sporter and a clay gun, again we’ll call it a sporter if it's for sporting, a trap if it’s for trap; a clay gun is just a little bit to broad a term perhaps. However, a sporter is a gun that's technically designed to do everything.

So first things you'll notice about the two is there’s a weight difference. The Sporter is about four and a half ounces heavier (I didn't just feel that me weighing them) than the Game. However, sporters are becoming lighter and lighter as time goes on, that's just a fashion thing. There was a time when they were all about eight pounds and again they’ll be about seven and a half pounds, but you know, they’re generally heavier.

The reason for that is that you're going to carry it around for a short period of time with the ability to stick it down in the rack next to a stand, take it out and go ‘pull, bang! pull, bang! pull, bang!’, back in the slip and then you go and stick it in the next rack until it’s your turn to shoot again. You're gonna shoot a hundred cartridges in what, two hours, get in, enjoy yourself and go home. So your actual time with a gun in hand is fairly minimal. Weight also absorbs recoil so the weight is there for those hundred cartridges you’re going to shoot to absorb as much recoil as possible and make it a nice stable, steady gun.

The game gun is lighter because you're going to stand like this all day long. And if you’re not standing like that, you’ll stand like this all day. It's very rare for you to put it down. Yeah, you put it in the slip between drives but there are hours and hours of waiting versus shooting time, and then even if you’re shooting big days where your gun is moving a lot more and shooting a lot more than it’s stood still, you're still having to do this. Move that gun around again and again and again. It does get tiring regardless of what anyone says; I get tired after a hundred birds both mentally and physically tired from concentrating too much. I get tired after a game day because I've been throwing my gun around all day (missing things!).

The lighter weight will help you move the gun faster, will help you get less tired and it's just more of a pleasant thing to carry around, more mobile. Whereas the heavier weight absorbs more recoil, and that's pretty much it. A bit more planted and stable to shoot - I suppose that's it.

The weight that's sorted; lighter in the Game, heavier in the Sporter. 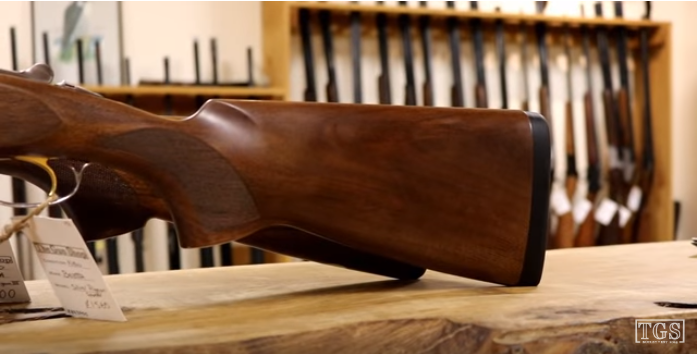 Stock Dimensions. Beretta has two different pads systems, one for the field guns and one for their sporters. The field guns, to strim weight, have a smaller stock height. The actual depth of the stock (this measurement from here to here) is greater on the sporter than it is on the game gun, so if I take this pad from there we’d be 10 mm shy - it's just not deep enough that's the problem.

So what we have to do to actually explain that I suppose is with a game gun you could be shooting over your shoulder like this at this any which way and you're walking along, you stop, something gets up, and bang. You shoot a bird and you notice another thing and you're off over the other shoulder like that. Because of this, you don't want quite as much shoulder engagement and a little bit more versatility. A) to trim weight, B) to make it more versatile to mount. You've got a bit more variation where you can put a smaller stop end.

With the clay gun - If bird A is coming like that and bird B is going like that - Bang! Bang! That's it. You do that five times and get to the next stand and go: Right, well there's more coming from there, Bang! Bang! Nice and simple maximum shoulder engagement makes for more consistency and consistency is the key to hitting lots of clays.  Consistency and variability - that’s not a word, but it is now. Next.

Stock dimension. The actual drop of the stock on a sporter will generally be higher and have less drop than the game gun. This is because with a clay gun you’ve got time to be nice and aggressive and it calls for a more closed style of shooting. If I mount this game gun in the same way, same aggressive style, the bead disappears. Game guns are generally designed to be shot in a more open style like this.

Nowadays, it's so much a crossover between what people want in one to what people want in the other gun; is hard to say what is what. What I would say though is the sporter should be multi-choked generally, more commonly speaking to add the variety and possibilities to it. The field gun will more likely be fixed. Strimmed the weight out. You don't need the variety as such as long as you’ve got something good in there, a quarter and ½, a half ¾ something like that. A good mid-range choke and you’ll kill everything with that. Removing that sort of thing also takes wait out of the end of the gun which makes it quicker.

However, nowadays you get more multi-choke game guns than you do fixed-choke ones, so that sort of thing has passed with fashion, unfortunately. 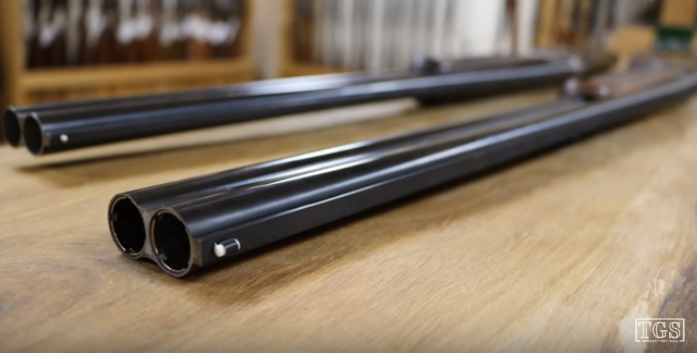 Next: what's on top of the barrel. The rib. On the sporter, it'll be slightly wider. That's because again as I’ve said, you see the rib, so if you're going to have a slight aerial view and see a little bit of rib, you’re going to want to have a nice wide plane to help add some level existence without dragging the eye too much.

On the end, you'll have a big Hi-Glo very visible site. In this case, you’ve got the white one, but you know white, orange, blue, yellow, green...

On the game going to have a thin rib. Not intended to see it but as to the sort of pointability of the gun, if you like, you’ll have a small brass, small silver, small nickel bead. Nothing too eye-dragging but just a nice point of reference.

Engravings can change, wood can change, generally, game guns can be described as more elegant and designed more for looks. You’ll end up with a game scene on the side, a slightly higher grade wood perhaps. With the sporter something a little bit more basic but more money put into the barrel, so you have on this one Optima+ barrels, on the game multi-choke you’ve got Mobilchoke barrels. The differences aren’t massive, but certainly enough. Again, it's sales patter to be able to charge you more for the sporter than the game gun, which again doesn't really make much sense.

At the end of the day, right guys, what you do is you go into the shop, you find a gun you like the look and feel of. You don't look at the tag, of course, the price tag’s important but you don’t look at whether says sporter or field. Obviously one will be slightly better than the other, but for your first gun or your first gun's and for those of you just want to enjoy the sport and don’t take it too seriously, barrels are just steel tubes. It's not like a rifle where the quality of the barrel really matters. The barrels are just steel tubes that you put a cartridge in, it hits it and the shot comes out the end. That is as simple as a shotgun gets - you can break clays with a field gun and you can kill birds with a sporter. I shoot everything with a converted trap Aruku, with fixed-choke, full and ¾ barrels. It kills clays, it kills pheasants, it does everything I need it to do.

I'm sure that there have been times where I wish I had a thin rib and luckily I have other guns so, you know,  I’m not monogamous or anything to that particular gun, but that’s my main stay. It doesn't make that much of a difference.

However, when you're starting out it will help to have a gun specific to what you want to do, but don't let it stop you having a gun that you like the look of or really like the feel of because that’s more important than what it says on the tag.