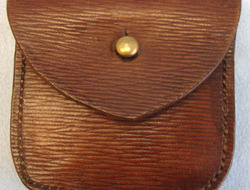 
A WW2 1941 dated 1939 Emergency Pattern rippled leather ammunition pouch. Just as had happened in 1914, emergency measures were required to provide equipment in a rush. The heads of the leather industry were approached and asked to design a leather alternative to Pattern 37. This was then delegated to two men. Over one weekend, they designed and made-up a set. This was taken to the War Office, where it was approved on the spot. An order for one million sets of Leather Infantry Equipment Pattern 1939 was passed back to the leather manufacturers. By the end of 1939, this order had almost been filled. This is a 1939 emergency pattern ammunition pouch. Made from rippled leather it has a fold over flap secured over a brass button on the front. It has one compartment with a small inner flap. On the reverse it has a leather belt loop which is stitched and riveted. The belt loop is stamped with "D.R.S.P. Cawnpore 1941 2 G 92" and a War Office 'Broad Arrow'. All stitching is present and secure. The price includes UK delivery. L 301
£75.00 ...Read full description
CategoryAccessories
SubcategoryOther Accessories
ConditionUsed
Price£ 75
Sale typeTrade
Manufactured Year1941
Your referenceL 301
Recommended UsageCollection item