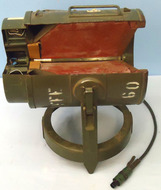 
DEACTIVATED INERT. This is a rare British inert instruct L14 A1 side-attack mine once used in the British Army. This is the British version of the French MI AC AH F1 off route anti-tank mine. The mine consists of a horizontal cylindrical main body with a large inset plate in the front. The detonator protrudes from the center of the front plate. The main body is supported on two arms which are attached to a circular base with three stakes. The mine can be triggered by a 50-metre breakwire, command or electronically triggered by an external sensor. This mine essentially a uses a large Misznay Schardin effect warhead/charge which is mounted on swivelling stand which has pointed feet to locate it. When the warhead is fired, the plate is formed into a slug which is propelled by the explosives, destroying the target. Although the mine mine can be detonated by a tripwire, infrared sensor, acoustic sensor, or a time delay fuse it can be armed using an infra-red sensor. The mine is 200 mm in diameter 260 mm long and weighs 12kg and is capable of penetrating 70 millimeters of armour at a range of 40 metres. This is a quarter sectioned L14 A1mine and retains most of its original green paint and is stenciled in yellow MINE A/TK L14A RDX/TNT O61A CY 5/78 (ROF Chorley, May 1978 date). The mine is stencilled twice in white INERT INSTURCT and FFE (Free From Explosives) 60. The top cover of the mine is detachable by losing off clips and holds D cell batteries for operation. The cover also has a lead to an arming/activation switch. The explosive and arming content are replaced by inert compounds. The stand for the mine rotates so the mine can be aimed. No licence is required to possess this mine in the UK if retained as part of a collection or display. Price includes UK delivery. O 1488
£975.00 ...Read full description
CategoryAccessories
SubcategoryAntiques & Militaria
ConditionUsed
Price£ 975
Sale typeTrade
Your referenceO 1488
Recommended UsageCollection item

In our community section
More about this: The lack of Grouse shoots this year costs some are...