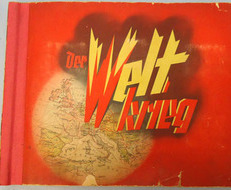 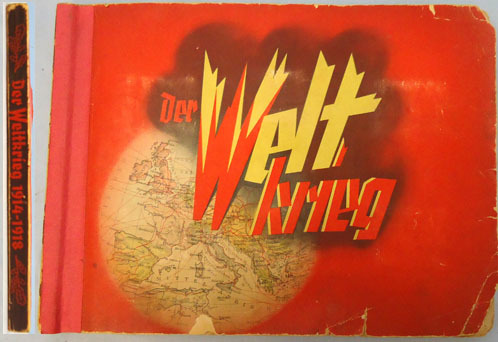 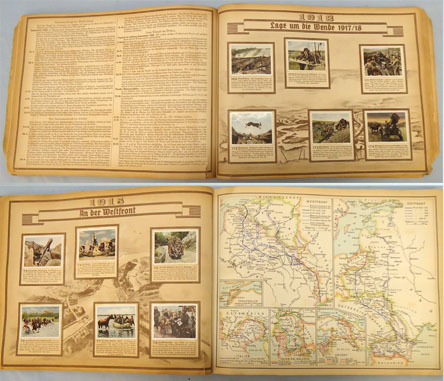 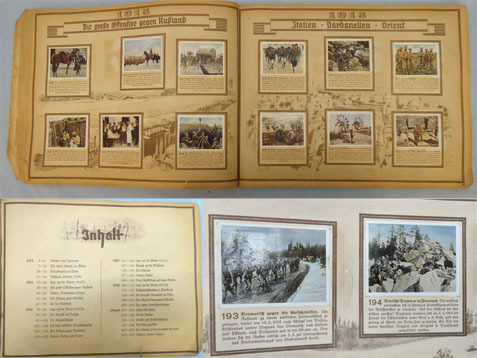 
Original and complete cigarette card collector's book titled Der Weltkrieg (The World War) compiled in Germany in 1937 as a commemoration of World War I. This scrapbook for cigarette cards from the 1930s provides an invaluable pictorial record of World War I. It captures the German perspective of the War in picture and writing and functions as a reference book for multiple generations. It features 270 full-colour cigarette cards, all are present and securely fixed, illustrating significant German battles and events. The scrapbook was issued by Cigaretten-Bilderdienst Dresden. This scrapbook captures the German perspective of World War I in pictures and writing. Themes such as nationalism, armed forces, everyday life during the war and stereotypical images of the enemy forces are referenced by the visual iconography. Through the chapters the progression of the war is illustrated. The individual sections are organised around each year of the war, 1914-18. The introduction to each chapter lists the different theatres and progression of the war. This summary is followed by sections, which under individual headings like 'Reason and Start of War', display cigarette cards and a short description of the image on that card. The first chapter also features a map of Belgium, France, Germany and parts of Switzerland in 1914 with the German armies and their campaigns. The appendix features cards depicting life behind the front line, the war in the colonies, and Germany's enemies. While the cigarette cards are in colour, the chapters are predominantly printed in sepia. The exception are maps of the East and West front, and the battles in Italy, Serbia and the Orient, which took place in 1915. The book measures 13 3/4" x 10 1/4". The price includes UK delivery. BO 319
£145.00 ...Read full description
CategoryAccessories
SubcategoryOther Accessories
ConditionUsed
Price£ 145
Sale typeTrade
Your referenceBO 319
Recommended UsageCollection item