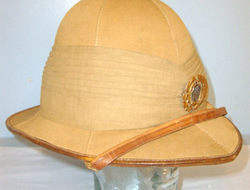 
The regular West India Regiment long pre-dated the Great War. The creation of the British West Indies Regiment was formalised by Army Order number 4 of 1916. The Order stated that the Regiment would be recognised as a Corps for the purposes of the Army Act. Its 1st Battalion, based at Freetown, sent a detachment for service in German Cameroons. 2nd Battalion saw much service in the West and East African campaigns and then went to Palestine in September 1918. Other Battalions saw action in Flanders. The Wolseley pattern Pith helmet is a distinctive British design developed and popularised in the late-19th & early 20th Century. With its swept-back brim it provided greater protection from the sun than the old Foreign Service helmet and its use was soon widespread among British Civil and Military personnel serving overseas. This is an original WW1 Era Wolseley pattern pith helmet. It has its original 9 fold khaki head band 'Pagri' & vented top mount. The front of the helmet is mounted with its original silvered, gilt and enamel Regiment badge. The helmet is complete with leather sweatband and leather chinstrap. The green cotton brim lining has areas of wear. The rest of the helmet is clean and undamaged. The crown of the helmet has the correct brass vent and red leather label ‘Ellwood & Sons London’ in gold. The crown also has a contemporary handwritten pencil name ‘Liston’ most likely the name of the West Indian soldier who was issued with this helmet. It is approx. UK size 6. Price includes UK delivery. Sn 12147
£375.00...Read full description
CategoryAccessories
SubcategoryClothing
ConditionUsed
Price£ 375
Sale typeTrade
Manufactured YearWW 1 era
Your reference12147
Recommended UsageCollection item