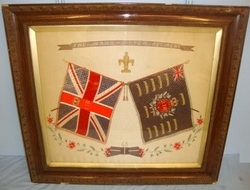 
During the 18th & 19th Centuries, the British West Suffolk 63rd Regiment of Foot took part in the American War of Independence, French Revolutionary War, Napoleonic Wars & The Crimean War. As part of the Childers Reforms, the 63rd and the 96th Regiments of Foot amalgamated in 1881 to form The Manchester Regiment. India featured prominently in the early history of the Regiment. The 1st Battalion had been based there for a decade before departing for Egypt. The 2nd Battalion saw service in Malta and Egypt. In the volatile North-West Frontier, the Regiment participated in two expeditions against warring tribes in 1891. Amidst growing tension between Boers and the British in the Transvaal, elements of the Manchester Regiment shipped to South Africa in September 1899 and the Regiment subsequently saw action in most of the major battles of the Boer wars. This is a beautiful original framed Silk Boer War Battle honours of the Manchester Regiment (63rd Foot) with foliate border and ‘63’ (Regiment of Foot). The hand embroidered silk with silver wire features a banner 'The Manchester Regiment' above Battle Honours of the 63rd Regiment of Foot / Manchester Regiment through to the Boer War (honours illustrated image 3), Union flag, Queen Victoria Crown Star with ‘West Suffolk (denoting 63rd Foot) . The silk is undamaged with no mothing and retains all of its original vivid colour and hand embroidery stitching. The silk is contained in its glazed dark wood frame which measures 30 x 27x 1 ½”. The tooled decoration frame has some of its original gilding present and has some small chips to the edges consistent with age and storage. The rear of the frame is mounted with cord for wall hanging and has a nice original Oldham manufacturer paper label (illustrated inset in image 3). Price for these impressive framed silk battle honours to a famous British Regiment includes UK delivery. Sn 12006
£295.00 ...Read full description
CategoryAccessories
SubcategoryOther Accessories
ConditionUsed
Price£ 295
Sale typeTrade
Your reference12006
Recommended UsageCollection item