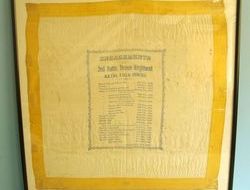 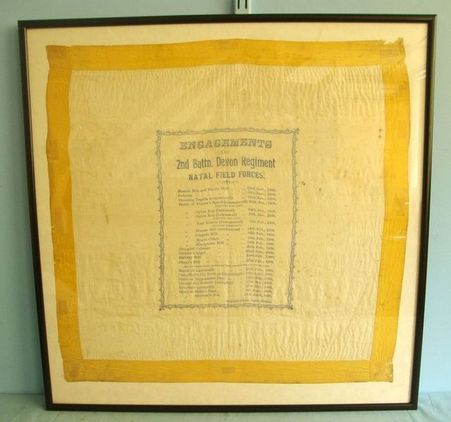 The 2nd Battalion The Devonshire Regiment were based in Aldershot in the summer of 1899. At the outbreak of the Boer War they had a total of 1037 Warrant Officers and Other Ranks. Of these, 35 men formed a mounted infantry detachment. The 2nd Battalion became part of General Clery's 2nd Division. They took part in the Battles of Colenso and Spion Kop, and were involved in action on the Tugela River, Cingolo Hills and the Assault of Monte Christo. They were also involved in the Relief of Ladysmith at the strategic position of Wagon Hill. This engagement on January 6th was to become a famous day in the Battalion's history. On that day the Boers launched a determined attack on the two tactical vantage points at Caesar's Camp and Wagon Hill, a flat topped hill running east and west on the south side of the township. The Devon's action at the relief of Ladysmith and repelling the Boers at Wagon Hill has never been forgotten. The Battle of Wagon Hill is still commemorated with a special dinner on the 6th January every year. This is a beautiful original framed Silk Boer War Era neckerchief / scarf with hand embroidered Battle honours of the 1st Battalion Manchester Regiment (63rd Foot). The silk which measures 21” x 21” features the Boer War Battle Honours of the 2nd Battalion The Devons. The Silk is undamaged with no mothing and retains all of its original colour and hand embroidery stitching. The silk is contained in its glazed dark wood frame which measures 24 ½” x 24 ½” x ½”. The rear of the frame is mounted with cord for wall hanging. Price for this impressive original Boer War piece to a British Battalion which saw much action during the Boer War includes UK delivery. PI 153