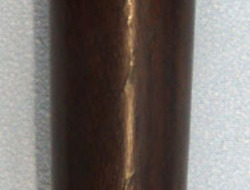 A George III hand decorated wooden Tipstaff/Constables Truncheon. George III reigned from 4 June 1738 to 29 January 1820 was King of Great Britain and Ireland from 25 October 1760 until the union of the two countries on 1 January 1801, after which he was King of the United Kingdom of Great Britain and Ireland until his death. The earliest record of the Tipstaff (Warrant Stick) was in the 14th century. The name derives from the early origins of Policing when Warranted Officers would apprehend a criminal with the help if necessary of a tipped staff. The staff would be made of wood or metal and were not only a means of self defence but the tips of the staffs would bear symbols of their authority. Modern Police Truncheons originated from these Tipstaffs. This is an excellent original Georgian era Tipstaff in a form similar to those used in the reign of King George III. The body is made of a heavy weight wood with cylindrical body and tapered smooth handle. The staff has hand painted decoration featuring the post 1816 Royal Coat of Arms The staff also has a stylised Manchester City Shield with red background and gold diagonal lines below a beehive with flying bees above. The staff measures 12" overall length and the wood is undamaged. All of the staff’s gold, green, blue & red decoration is vivid. Price for this piece of Policing history includes UK delivery. Sn 13272