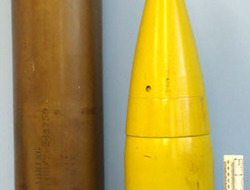 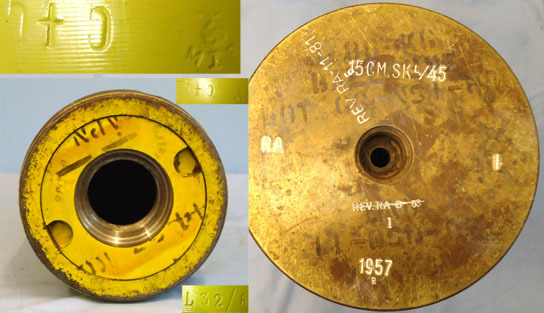 This is a rare WW2 DEACTIVATED INERT unfired German naval WW2, 1941 dated APCBC (Armour Piercing Capped Ballistic Capped base fused) round for the German 15cm deck gun (150 x 815R). These guns were originally fitted during and pre WW1 as the casemate-mounted secondary armament in all Imperial German dreadnought battleships and battlecruisers, the armored cruiser This WW2 45.3 kilograms (100 lb) projectile was used in the 15 cm Rheinmetall TbtsK C/36 gun and was a German medium-caliber naval gun deployed on Type 1936A (Narvik class) destroyers during the Second World War. The steel high explosive projectile is fitted with two iron driving bands and is stamped 7540 Kriegsmarine stamp over M1 . The Cap between the projectile and the ballistic cap is stamped 7540 and the ballistic cap is also stamped 7540 Together with L32/A . The base of the projectile is stamped 7545 27 . The base fuse adapter is stamped 7545 . There is also black stenciling on the base of the projectile 44.(27??) KG APN . The case is Stamped 15CM SK L/45 RA 1 1957 and various reissue stamps. The case is also stenciled ?.86-KG over BALL 297 over LOT 66-N31-8 over LAB over 11-OSD-85 . These guns were later used by the Norwegians after WW2 for their costal defense, using the guns left behind by the Germans and repatriated to the Norwegians after WW2. When the supply of original German cartridge cases was used up, the Norwegians started manufacture of the cartridge cases. This is one of those cartridge cases. Most of these guns were still available for use until the 1990s. The price includes UK delivery and no licence is required to possess these inert rounds in the UK if retained as part of a collection or display. Due to the weight of the projectile, delivery is by arrangement and at cost. Sn O 1056